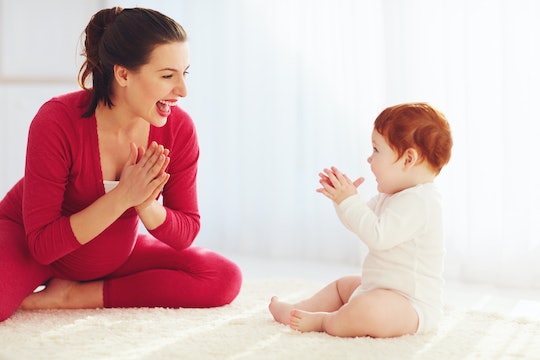 What Experts Want You To Know About Back-To-Back Pregnancies

Sometimes it's planned, other times it's a surprise, but there's nothing unusual about having "Irish twins" — a pair of siblings who are only about a year apart. Many people who are the product of closely spaced pregnancies have positive memories of the special bond forged with a sibling of similar age. From parents' perspective, it may be difficult initially, but ultimately it can be a relief to get your whole family here as quickly as possible and move on from the pregnancy and diapers stage of life. But what are the risks of back-to-back pregnancies? If you only think about the big picture, you may not have considered how back-to-back pregnancies affect your body and your emotional wellbeing.

Whether you're already pregnant or still figuring out how you want to space your children, it's time to learn the physical effects and risks of back-to-back pregnancies on you and your unborn baby, along with some tips for coping. Romper spoke with two OB-GYNs over email, Dr. Amy Peters of Saddleback Memorial Medical Center in Laguna Hills, California, and Dr. Yen Tran of Orange Coast Memorial Medical Center in Fountain Valley, California. Together, these two doctors provide differing perspectives on the risks and physical effects of closely spaced pregnancies, breastfeeding while pregnant, and what you can do to maximize your wellbeing and make life easier during a challenging time.

For starters, the physical shape you're in at the beginning of your second pregnancy contributes to the effects on your body. According to Peters, "a nine-month interpregnancy interval could make it difficult for the mother to be her healthiest for the second pregnancy." In particular, "she may not have lost all of the weight gained, and she could be increasing her risk for gestational diabetes in the second pregnancy."

If the pregnant mother is still breastfeeding her previous baby, Peters observes that "weaning naturally occurs fairly quickly, although I have had a couple of patients who continued to nurse their first [child] during the entire second pregnancy." But Peters points out that weaning may occur whether or not you're trying to because "milk supply frequently declines during the second pregnancy." As for why this is, she explains that "pregnancy requires about 300 calories extra per day and a lactating woman may require 500 calories extra, so combining those together may make it challenging for some women to have adequate nutrition and hydration."

A 2003 article, "Risk of Maternal Nutritional Depletion and Poor Outcomes Increases in Early or Closely Spaced Pregnancies," published in The Journal of Nutrition, supports Peters' point with the finding that "women with early or closely spaced pregnancies are at increased risk of entering a reproductive cycle with reduced reserves [of nutrients]." In other words, every pregnancy makes extra demands on your body and nutrient supply, but if you begin a pregnancy with depleted stores of nutrients, it will be harder to catch up and get the amount of nutrients and calories you need, especially while simultaneously breastfeeding.

Another point about breastfeeding while pregnant, made by Tran, is that breastfeeding increases your body's production of oxytocin, which could potentially cause uterine contractions and result in premature delivery.

C-section history is another important factor in how back-to-back pregnancies physically affect your body. According to Tran, "it's highly recommended for patients with histories of C-sections to wait 18 months before their next pregnancy to allow the scars enough time to heal to prevent uterine abruption."

She also mentions the common physical effects of pregnancy, like fatigue and morning sickness that every mom is familiar with. However, Tran points out that these symptoms can be harder to deal with in a second pregnancy, especially one that follows closely after the first one. For example, "having another baby immediately could be exhausting to moms because of a lack of sleep from caring for her infant."

The more responsibilities you have, including work outside of the home and one or more children, the harder it will be to rest and care for yourself during a second or subsequent pregnancy. I can attest to this even though my first child was nearly 2 when I became pregnant for the second time. I found my second pregnancy to be much more physically demanding and exhausting than the first one, mainly because I couldn't just flop on the couch whenever I wasn't at work.

Besides the potential adverse effects on your body, closely spaced pregnancies can also put your unborn child at risk. According to Mayo Clinic, a subsequent pregnancy within six months of a live birth can increase your chances of "premature birth, placental abruption, low birth weight, congenital disorders, and schizophrenia." The website also noted recent studies that link closely spaced pregnancies to an increased risk of autism. However, Peters clarifies that "the risk for preterm birth tends to be more so for women whose first baby was born prematurely."

So how can you take care of yourself during a closely spaced second pregnancy? Both Peters and Tran recommend taking a prenatal vitamin and accepting help from others, whether that's a babysitter, relatives, or friends. Peters adds that pregnant women should try to maintain a healthy weight. (This is different for everyone, so talk to your doctor.) Tran also recommends calcium and Vitamin D supplements, and reminds pregnant women to get enough sleep and hydration.

If you're not yet pregnant again and trying to figure out how best to space your children, Tran recommends waiting at least two years after your first child is born. Peters adds that older women may not be able to wait that long, and "the small potential for complications arising from a short interpregnancy interval does not compare to the exponential increase in risks associated with advancing age." She also suggests planning for postpartum contraception and pregnancy spacing while still pregnant with your first child.

If you are already pregnant with a second or subsequent child less than a year after giving birth, talk to your doctor about how the risks and effects apply to your particular situation. Focus on caring for yourself and your children, and ask for/hire as much help as you need to make this happen.