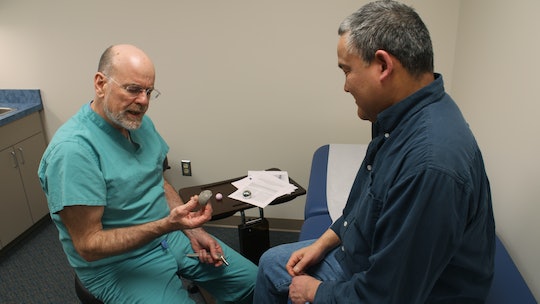 'The Bleeding Edge' Explores The Risks Of Certain Medical Devices

In Netflix’s new documentary film, The Bleeding Edge, writer/producer Amy Ziering and director Kirby Dick dive into the world of medical technologies and the terrifying, — and sometimes deadly — consequences they bear. After watching some of the horror stories in the documentary, you may be a little hesitant about certain medical tech. But what are the risks of medical devices really, and what should you know before you opt for one?

The Bleeding Edge takes a deep look at the medical device industry and highlights the dangers of certain devices, including the Davinci Surgical Robot, cobalt hip replacements, transvaginal mesh implants, and most notably, the Essure birth control coil. While all of these devices were approved by the U.S Food and Drug Administration (FDA), the documentary highlights the loopholes that allow some devices to hit the market without sufficient testing.

One of the most controversial loopholes is the 1976 FDA 510(k) Clearance Process, which allows certain medical devices to gain FDA approval without any clinical studies to back up their safety or effectiveness. To qualify for a 510(k) exemption, all a device manufacturer needs to do is claim that their device is “substantially equivalent” to one that is already on the market. So, without much testing or regulation, some devices are able to come to consumers, but many are then recalled after issues arise. Drug Watch indicated that this has led to an increase in device recalls, with over 180 million medical devices being recalled in just the second half of 2016.

Just a a week before the documentary is set to air, CNN reported that Bayer pulled it’s Essure birth control device from the market after the FDA ordered its sales to be restricted back in April. The Essure device is a coil which is implanted into the Fallopian tubes, which helps create a barrier, blocking sperm from fertilizing an egg. But in some cases, the device has been found to break off and travel to other parts of the body, causing internal injuries and neurological disorders, as highlighted in The Bleeding Edge. Essure has face nearly 16,000 lawsuits, noted the New York Times, and was already banned in several countries. Until now, the U.S. was the only country that still had Essure on the market.

The Bleeding Edge reveals how under regulated the $400 billion dollar medical device industry really is, and how it is able to thrive not only through FDA loopholes, but also through political lobbying efforts. When you think of medical lobbying, the pharmaceutical industry probably comes to mind, but in the film, journalist Jim Spencer talks about how much bigger the medical device lobby is. “People think pharma’s got power,” says Spencer. “No, no, no, the device industry has much more power.”

If you have, or are planning on getting a medical device, it’s important to discuss all the risks and side effects with your doctor. You can also contact the FDA’s Division of Industry and Consumer Education (DICE) for information about a specific medical device. On their website, DICE stated that their mission is “To educate our stakeholders with understandable and accessible science-based regulatory information about medical devices and radiation-emitting electronic products. Our stakeholders include the medical device industry, consumers, patients, healthcare providers, FDA colleagues, and other Federal, State, and local government agencies.”

When it comes to healthcare, despite being helpful, some devices come with a certain amount of risk attached. So it’s a good idea to stay as informed and aware as possible, and air your concerns to your healthcare providers.