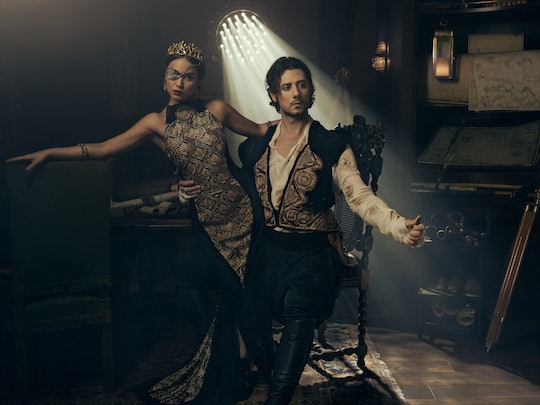 There's nothing like a magical quest to help get the gang back together again, which is exactly the direction The Magicians Season 3 is headed. Wednesday's premiere found Eliot, Margo, Julia, Quentin, Alice, Penny, and Kady all attempting to cope with the magic-free world that has been thrust upon them. But just because magic is gone, doesn't mean there isn't a way to bring it back — and apparently the answer lies in a book called The Tale of the Seven Keys. But what are the seven keys on The Magicians and how the heck are they going to help matters?

As luck would have it, Romper had a chance to sit down with two of Fillory's finest (and royalist) members: Hale Appleman (Eliot) and Summer Bishil (Margo), who were more than happy to help ~unlock~ (sorry, couldn't resist) the mystery about these special keys. “This season is all about the universal quest to restore magic," Bishil teases. "You need seven keys in order to do that." Interestingly enough, there just so happens to be seven members of the group to match the seven keys. But knowing this fantastical SyFy series, tracking the keys down is going to be no easy feat. After all, if I've learned anything from Harry Potter it's that searching for seven magical objects of any kind can be riddikulus-ly stressful. (OK, I'll stop.)

But let's take a moment and talk about these keys a little bit. By the end of Wednesday's episode — aptly titled "The Tales of the Seven Keys" — viewers only really discover what their mission is: find the keys. But what happens once the Fillory gang gets their hands on them? Will a door magically pop up that will easily lead them to victory? Not very likely. In fact, you could argue that getting the key is only half the battle since they come with a little added twist. “Each key serves a specific purpose," Appleman explains. "The first key creates an illusion of what the holder most fears, so it’s specific to the person touching the key."

So basically if I were to hold said key, I would then be presented with a terrifying killer clown or a snake. (Or even worse, a killer clown holding a snake!) Either way, you get the gist. It isn't good and will be something our heroes will have to overcome. "Each one pertains to a different aspect of humanity, of a human struggle or some magical quality that reveals a deeper or darker human truth about the holder," Appleman adds.

But what's almost as interesting as learning about the keys themselves is learning about what's driving these characters to want magic back so adamantly. In Eliot's case, Appleman feels that "magic is an essential aspect of his identity" and "restoring magic, restores Eliot." This makes sense considering how much magic has come to shape Eliot's life. I mean, it made him the King of Fillory, so without it he feels like part of him is missing.

Bishil, on the other hand, thinks Margo wants to restore magic "because she is overwhelming angry that she does not have any real power or say in how she governs Fillory." In other words, Margo views magic as a form of "currency. Money may equal power in the real world, but in the world of Fillory, magic equals power. And Margo is anxious to get back to collecting those dividends. "I think political gain is more interesting to her than the ability to demonstrate magic," Bishil adds. "But she can’t do one without the other in Fillory."

So will Eliot, Margo & Co. succeed in their key-collecting quest and obtain the magic they so desperately desire? You'll have to keep watching Season 3 to find that out. However, Appleman did also share that fans can expect to see "some surprising pairings this season" and promises "a particularly big season finale," so rest assured it's all going to be well worth the wait.