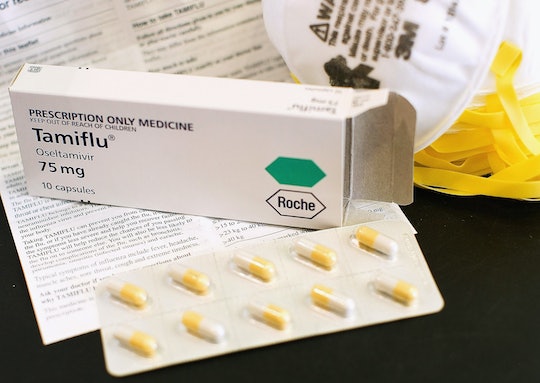 Here's The Truth Behind Those Scary Side Effects Of Tamiflu, According To Experts

I am on day five of Flu B. Several days ago, I spent a lovely afternoon out and about with my family. We had a great time and were out all afternoon. When we got home, it felt like I was hit by a truck. All the energy left my body, and I couldn't function. My airway wasn't occluded, and my fever wasn't out of control, but it was awful. I can't imagine if I was a little one going through it. Talk of Tamiflu came up right away, but, what are the side effects of Tamiflu in kids? Is the cure worth the cost?

According to pediatrician Dr. Chad Hayes, there can be significant side effects of Tamiflu. Some of these are side effects that you see on almost every warning label, such as nausea and vomiting. The more concerning side effects of Tamiflu to Dr. Hayes are the neuropsychiatric events that have been witnessed in children who've received the prescription. Dr. Hayes tells Romper that these side effects happen even when Tamiflu is used prophylactically to attempt to prevent flu, so you know it's not just the flu causing the symptoms. It happens in 2 to 3 percent of people, and they are severe. He tells Romper, "One of my colleagues had a child treated with Tamiflu for relatively mild case. Parents woke up to a noise at night and found him trying to break out of the second story window because he thought it was the door." Scary stuff.

The Centers for Disease Control and Prevention (CDC) advocates the use of antiviral medications like Tamiflu when influenza symptoms first present in certain portions of the population, such as small children, pregnant women, and people with an underlying condition or medical illness, but they stop short at recommending it across the board as a means of effectively treating the virus for all. However, with the concerns over the flu at such a high, patients might see Tamiflu as a panacea in a terrifying season, when in reality it's just one treatment that might not be as effective as people hope, even if it does have its uses when conditions are met.

Dr. Scott Krugman of Medstar Franklin University Medical Center in Baltimore, Maryland tells Romper that the side effects of Tamiflu must be weighed against the possible benefits. He says that it can reduce the flu by a day generally, at best, and should perhaps not be the first line of defense for everyone. Not only that, he also reports that small children have been known to have pretty scary hallucinations while receiving the drug. Dr. Krugman, like Dr. Hayes, agrees that the side effects of nausea and vomiting (general gastric upset) are more common than the worrisome mental effects. Dr. Krugman says, "We have to weigh if the benefits of this drug are worth it against what we know is a generally limited, miserable infection." He says that it's likely more valuable in patients with asthma or cystic fibrosis or other underlying disease, but that the general hale 8 to 10-year-old? It's probably not going to do much more than just shorten the duration of the virus.

There is one more thing parents and providers consider regarding Tamiflu, and that's the cost. It's not a side effect, but it matters. Out of pocket, Tamiflu is about $100, according to TrueMedCost.com. While that might not seem like all that much, it can be a burden considering that it might not do as much as you're hoping. According to Dr. Krugman, "Your child is still going to miss four or five days of school." Those missed wages from watching your child, plus the cost, might not make sense if your child doesn't need the antiviral.

Doctors Krugman and Hayes both agree that the flu vaccine is the most cost-effective and best treatment against the flu, even if it's not 100 percent effective. There's no magic bullet to treat the flu, and treating it can be an expensive and risky proposition. Get the flu shot now if you haven't already, wash your hands often, and teach your kids to do the same. As someone getting over the flu, trust me, you do not want this. If there's even a small chance you can prevent it, you should.