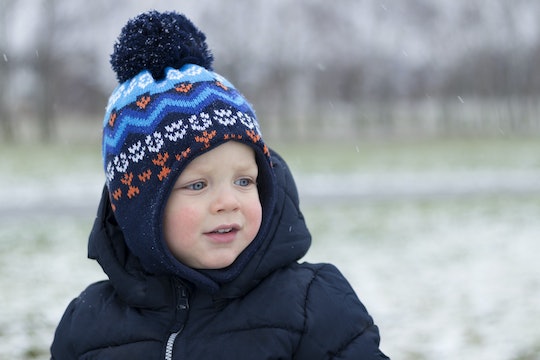 I know that at some point, I moved from being an avid sun worshipper, to an active sun avoider. I now lather up in buckets of SPF, wear a hat, sunglasses, and protective clothing almost all of the time, and I do the same for my kids. While the risks of skin cancer are real, there's a flip side to the SPF-obsessed coin, and that's a vitamin D deficiency. Vitamin D is synthesized in our bodies from sunlight, and few of us get enough — especially our children. So what are the signs of vitamin D deficiency in toddlers to watch out for? There's a few and strategies to prevent it.

The study also found that it's almost impossible for those of us who live in the north to get enough sunlight to build any reasonable level of vitamin D in our blood during the winter. A similar study completed by the American Academy of Pediatrics (AAP) found that nearly 10 percent of all children suffer from a vitamin D deficiency. This caused the AAP to take action. In the past few years, the AAP has made a stand and really pushed for all parents to supplement their children with vitamin D drops or chewables. The amount recommended for children varies by age, so you must check to be sure, but for most children, the AAP recommends 400 IU per day.

While all children are at risk for low levels of vitamin D, children with darker skin are much more susceptible to vitamin D deficiencies because their skin doesn't allow as much sunlight to penetrate through it as their paler counterparts, making them the most vulnerable population.

The American diet simply doesn't consume enough of the few foods with trace amounts of Vitamin D to support healthy blood serum levels. Foods like oily fish and egg yolks are among the best dietary sources for Vitamin D, noted Prevention, but you'd have to make sure you've eaten enough each day to maintain that level of vitamin D in your blood, and that's simply not attainable or sustainable for most American houses. We tend to eat for pleasure more often than we eat for the nutrients.

The biggest risks for vitamin D deficiency are rickets and hypocalcemic seizures, according to BMJ. Rickets is a bony deformity that leads to weakened bones, malformed bones, and the inability to lift heavy objects or to bear weight. A hypocalcemic seizure is a dangerous seizure that occurs when there's an imbalance in the body. The seizure is a reaction to said imbalance. Unfortunately, both of these conditions are on the rise. That's partly because we're so much better at protecting our kids from the sun with SPF and clothing, but also because as a society, we just don't spend as much time as we once did outside.

There is a movement in the medical community to begin regularly testing our children's blood for their vitamin D serum levels in much the same fashion we test them for lead levels and blood sugar at their yearly appointment. Johns Hopkins is leading this charge. Researchers argue that it needs to be routine because of the rise in rickets and seizure cases. Just remember, you can always request a vitamin D serum level check if you think your child is particularly vulnerable, but that doesn't mean you still don't need to take your vitamins.