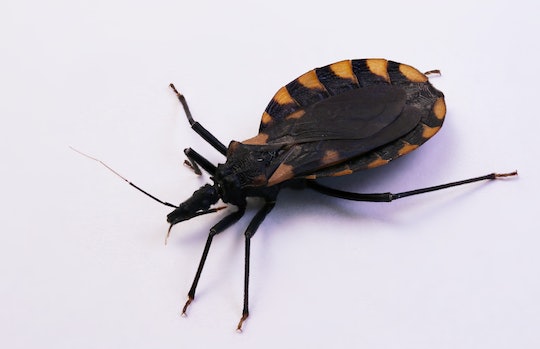 The name "kissing bug" sounds so cute, like they might get their own movie voiced by popular comedians or even a Fingerling toy. However, these bugs aren't likely to engender any warm feelings like other more benign creatures in the land of entomology. These bugs, and their bites, come with some serious risks to the victim, and parents all throughout the southern U.S. are taking note. But how do you know if you've been bitten by a kissing bug? What are the symptoms of a kissing bug bite? Are they like a mosquito or tick bite, or does their insidious nature mean something different?

Kissing bugs, also known as triatomine (reduviid) bugs, can potentially infect humans with the parasite Trypanosoma cruzi that can lead to the sometimes deadly Chagas disease, according to the Mayo Clinic. Native to Central and South America, recently kissing bugs have been found in the southern United States. For the past several years, Texas A&M University has been closely studying the influx of the bugs in the United States, tracking their location, the spread of Chagas, and also identifying those populations most at risk for contracting the dangerous disease. Researchers have found that there is a huge range of symptoms for those who've been bitten, making it a particularly wily foe.

Honestly, I'd never heard of kissing bugs before, and judging by the name, I was assuming that they were going to be some small annoyance that meant you'd have to clean your furniture or maybe fumigate your house. I had no idea that if left unchecked, the subsequent infection from the kissing bug could lead to deadly cardiac complications like stroke, heart disease, and heart rhythm problems as noted by the National Institutes of Health (NIH). They noted that the bites can sometimes appear like mosquito bites, hives, or even lesions near the affected area. The bugs can be quite big, as large as just over an inch in length, and the spread of the bite — if any shows up — can be just as large.

The method of transmission is pretty gross as well. It's not just a bite — though the fact that these bugs prefer to bite around the eyes and mouth, as per the report, is pretty gross — it's that they also poop around these bites, and that feces is what carries the parasite into the bloodstream. Also, you can get the feces in your mouth, nose, or eyes and have it spread that way. But what happens after all of that? What are the symptoms of the kissing bug bite or transmission, and possibly ensuing parasitic infection? Because as the bug makes its way further and further into the continental United States, it becomes a matter of supreme public importance, and yet many parents are like me and know little to nothing about the bug or its bite.

That's why I spoke to entomologist and private researcher Christopher Michaels of South Texas to find out what to look out for in the event you think you've been bitten.

He tells Romper, "Reactions to reduviid bites are not universal, and you may never know you've been bit. The symptoms can vary from unnoticeable to cardiac arrest and everything in between." He says you may get a fever or swelling, you might throw up or get dizzy, but in the acute stage, many don't notice much. He says that it becomes a problem when you reach the chronic stage — if you have been bitten and develop symptoms of Chagas disease.

Michaels doesn't mince words. He says this disease is nothing to screw with. If you have been traveling anywhere that Chagas disease has been found and you notice swelling or have a fever — especially swollen areas around bodily orifices — get checked out. Immediately. Currently, it's primarily in Central America, Mexico, and South Texas, but it's been found as far west and north as Los Angeles, noted Science Daily. The second stage of the symptoms, once it reaches chronic stage, could be an irregular heartbeat, difficulty swallowing, or digestive problems, according to the Mayo Clinic, and those show up 10 to 20 days post bite. Seek help immediately.

It's a scary disease and a scary bug, but it's important to note that if caught, there are drugs that are extremely effective in treating the condition. So if you notice anything out of the ordinary, get it checked out.

More Like This
Endometriosis & Your Sex Life
What Is RSV?
How Much Hair Loss Is Normal? 9 Signs You’re Losing Too Much Hair
6 Sex Positions To Reduce Leg Pain