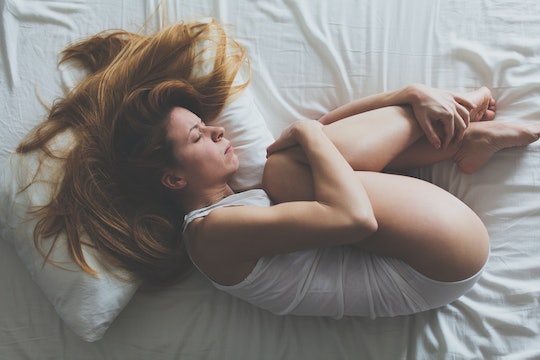 What Are The Symptoms Of Vaginismus?

If you're experiencing painful intercourse, you may be wondering if you suffer from vaginismus. And if that's on your mind, then you're likely asking what are the symptoms of vaginismus? Although symptoms vary from woman to woman, Medical News Today noted that the leading symptom of vaginismus is pain during vaginal intercourse. The level of pain can be moderate to severe. Pain can feel like a burning sensation or pressure, and in some cases can cause spasms so acute that you can't breathe. In an article about vaginismus on Jezebel, the tightening of the vagina during vaginismus was described "as being similar to when you reflexively close your eyelids when an object gets too close to your eyes." In other words, it's involuntary, which makes it all the more frustrating to women affected by it.

Vaginismus might be caused by medical conditions like a hormonal imbalance causing estrogen levels to be low, psycho-emotional trauma, or a combination of both, noted Mayo Clinic. Other symptoms of vaginismus include pain during insertion of a foreign object into the vagina (like a tampon or speculum during a pelvic exam) noted Medial News Today. These symptoms are not to be ignored or deemed "hysterical." They're very real.

The pubococcygeus (PC) muscle group, the muscles of the pelvic floor, are the muscles involved with this condition. Licensed Clinical Social Worker Connie Lappa told Jezebel that your doctor can give you a special exam to determine which set of pelvic floor muscles are most affected the condition. Once your doctor targets which muscles need a little help loosening up, you can cure vaginismus by performing special Kegel exercises. Additionally, Medical News Daily reported, your doctor can insert a special plastic dilator to help you perform pelvic floor exercises. Just think of it as Pilates for your vagina.

Psychology Today discussed how psychodynamic therapy including sex therapy might be useful in treating vaginismus. And although individual therapy might also be useful in treating this condition, New York Magazine noted that women with severe pelvic floor dysfunction don't want to be told their emotional state is controlling their vaginas. Until more research can be done on vaginismus a multi-modality approach is best in its treatment.