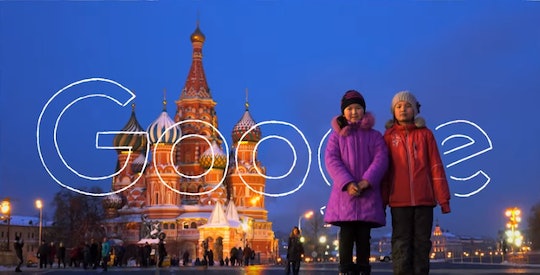 What Are The Women Saying In The International Women’s Day Google Doodle? The Message Is About The Future

In prior years, on International Women’s Day, online search giant Google would customize its logo to honor the achievements that women made throughout history. Typically, the Doodles would celebrate women in science, journalism, arts, civil rights, or sports — women who overcame adversity to make a mark on the world. But this year, Google visitors saw something a bit different on International Women’s Day: a cartoon Doodle featuring women and girls of various ages, “talking” through symbols that seem to represent a host of interest areas. And what are the IWD Google Doodle women saying? According to Google’s blog, the Doodle represents how hundreds of women said they planned to change the world in the future.

A crew of all-female filmmakers captured what the women had to say in a 90-second video that includes their actual words (in some 14 different languages) along with animation that almost acts as a translation or shorthand for the viewer.

The result surprised the project creators themselves, as it grew into a collection of dreams more varied and inspirational than anything the creators could have imagined, according to a statement posted on the Google blog:

The aspirations we heard were as varied as the women and girls who shared them, from the very personal—swim with pigs in the Bahamas—to the very global—give a voice to those who can’t speak—and everything in between. When it was done, we found that our own ‘One day I will…’s had grown bigger and richer, inspired by the women we had met.

The participants varied in age “from toddlers to grandmothers” according to Google’s statement, and some of them had already made major monumental strides toward putting their vision into action. The video featured anthropologist Jane Goodall sharing her hope to one day “discuss the environment with the Pope,” and Nobel Prize winner Malala Yousafzai (who was shot by the Taliban over her campaign for girls' education in Pakistan) with activist Muzoon Almellehan sharing their dearest dream and life’s work: “One day we will see every girl in school.”

In a recent interview with UK magazine Mirror, Ben-Rafael stressed the importance of using real women and girls — rather than animated characters — for the new campaign:

International Women's Day is a celebration of the women who are here today working towards a better future, and in that sense it was important for me to make sure that we celebrate the real women. It's the unsung heroes, this is what we're celebrating, so not showing the real women behind this would be a big loss.

To continue its focus on “real women,” the Google team asked users to share their own aspirations using the hashtag #OneDayIWill. By Tuesday afternoon, thousands of women had weighed in on Twitter with a range of visions for how they can participate in shaping the future.

Check out the full 90-second International Women’s Day video on Google’s homepage, and be prepared to pull out some tissues.