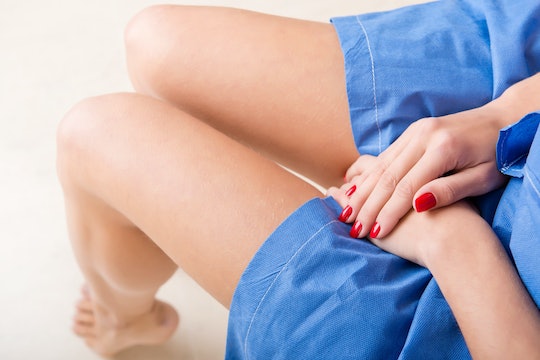 What Are Uterine Fibroids?

Because women's reproductive health is such an important topic, and one that needs more research, it's perfectly valid to ask your gynecologist what are uterine fibroids? Most annual pelvic exams include a moment in which your doctor feels around your uterus with his or her fingers. This is often how uterine fibroids are detected. OK, but you still want to know what they are.

According to Mayo Clinic, uterine fibroids, also called leiomyomas or myomas, are noncancerous growths that rarely develop into uterine cancer. They are basically masses of cells, that for some unknown reason, have multiplied to create a firm, rubbery tumor around the myometrium (the tissue around the uterus). Uterine fibroids vary in size: some are as small as seeds, while others can grow to be five pounds, and in some rare cases grow as large as a basketball, making you appear pregnant.

Although uterine fibroids are usually benign, doctors may opt to remove them for testing by performing a biopsy, or because they are causing discomfort. Your doctor may also suggest that you do nothing and leave them be. Treatment options for uterine fibroids depend on their size, the severity of your symptoms, your age, and if you want to become pregnant in the future, according to the United States Department of Health and Human Services, Office of Women's Health.

Whether or not you want to have a live birth, there are several things you should know about uterine fibroids, so you can be as informed as possible about your body, because it's the only one you've got.