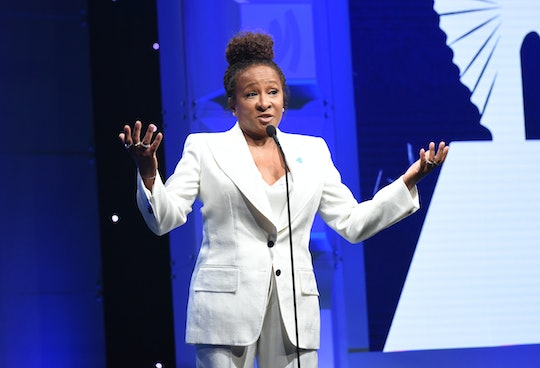 Wanda Sykes Jokes About Her Parenting In Her New Netflix Special

Wanda Sykes has a new Netflix comedy special coming out (followed by a standup series hosted by Tiffany Haddish, which she'll executive produce) and, among the topics tackled in Wanda Sykes: Not Normal is her own family. Since they're part of her routine, viewers tuning in may be wondering what Wanda Sykes' kids are named. Her bilingual 10-year-old twins have a French mom, so their names nod to their French heritage. Sykes and her wife Alex Niedbalski welcomed Olivia Lou and Lucas Claude in 2009, according to People, a year after their wedding and Sykes' public coming out. She jokes about both her wife and her kids in the new special, but Sykes is mindful to make sure she's the butt of the jokes in her storytelling.

"I’m showing that, 'Hey, I mess up too.’ As a parent, we screw up sometimes," she told Variety in an interview ahead of the special's release. "I don’t mind showing that yeah, I don’t have my sh*t together either."

But Sykes also dives into the political landscape in her special and, in addition to plenty of Trump jokes, she doesn't shy away from the complexities of having white kids within an interracial, lesbian relationship.

Sykes talked about the challenges of making sure her kids are cognizant of race in an interview with The New York Times Magazine ahead of the special, saying:

I think about that a lot. You want it to be a world where they can just live and be good people and not have to think about that, but you have to have the conversation. You do. When something comes up, I’ll address it. I do notice, like for their birthday parties, I look around and go, “Wait, you mean to tell me they’ve only got one little black friend?” But I can’t force it.

The special comes out after a tumultuous relationship with the streaming platform. Last year, when fellow comedian Mo'Nique publicly complained that Netflix offered her significantly less than the sum offered Dave Chapelle for a comedy special, Sykes added her voice to the pay disparity conversation. She revealed that she was offered even less — less than half of Mo'Nique's sum, per Variety — for a special with Netflix. This ultimately led Sykes to take her first set to Epix, where it aired in 2016. This time around, however, Sykes told Variety that Netflix "came in with the best offer" for her second special.

In a 2017 People interview, Sykes admitted that her kids, and her daughter especially, had picked up not only on the comedian's competitive streak, but also the realism that comes with it. She explained how when her daughter Olivia, then 8 years old, sensed she wasn't going to win something, she'd frequently quit, rather than endure the humiliation of losing. This often prompted teachable moments about the joys of having fun, playing as a team, and building experiences, rather than accumulating victories.

Wanda Sykes: Not Normal is currently streaming on Netflix.