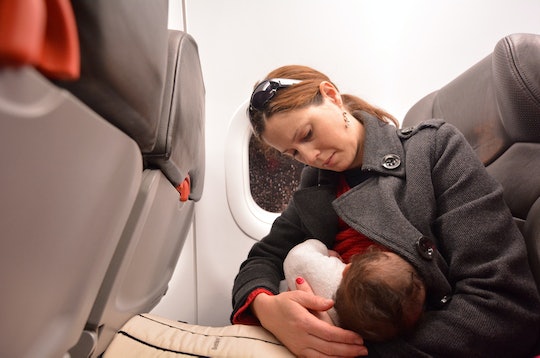 Whether you're only flying for an hour, or you're on a transpacific flight from New York City to Seoul, South Korea, flying with a baby is never an easy thing to do. Between all of the regulations, hassles, and side eye from passengers who act like they've never seen a baby before (and they're pretty sure it's a tiny explosive), it's problematic at best. If you're breastfeeding, you may find this adds a whole new layer of considerations to your list. For instance, what are your breastfeeding rights on an airplane? Can you pump? Do you have to cover up? How about milk storage on a long flight?

The answer is a complicated one. Other than the laws in the United States that breast milk and formula do not have to comply with the TSA rule that all liquids must be in 3-ounce containers and stored in a quart-sized zip top bags, there really isn't federal legislation on this issue. This means that your rights regarding breastfeeding and pumping are on an airline by airline basis, and can shift wildly between one and another. It's also dependent upon international laws. For instance, the milk storage law applies only to domestic flights and flights leaving the United States. It does not apply to flights entering the United States from other countries, which frequently have more stringent liquids laws, according to their federal regulations.

While most airlines have done a good job at taking care of the mothers on-board, there have definitely been some incidents that are cause for concern to breastfeeding moms taking to the not-so-friendly skies. Incidences of shaming are still happening, but thankfully, social media has done a lot in the way of holding airlines accountable for such occurrences. Even airlines flying out of notoriously conservative countries are bending over backwards to accommodate nursing mothers. It is true, you may be asked to cover up, and often, this is at the discretion of the flight attendants, according to FlyingWithBaby.com, so it's best to be prepared for that eventuality. The same goes for pumping on-flight. However, after spending a substantial amount of time researching this, I have found that most airlines don't exercise this policy often.

When you get to your destination, the Centers for Disease Control and Prevention has published a helpful article about traveling with a breastfeeding infant that covers everything from medications to Zika virus, and how to find out about public breastfeeding laws in that specific country.

As you go about determining your breastfeeding rights on an airplane, your best bet is to call your carrier directly, or email them, and keep a record of this correspondence in the event trouble arises. Also, be sure you're specific when you speak with them, noting the age of your child, and to and from where and when you're traveling. Some airlines require babies over 2 years old be in their seat and buckled at take-off and landing, which can lead to confusion, as it seemed to do recently when a mother was kicked off a Spirit Airlines flight for attempting to breastfeed her 2-year-old at take-off.

Speaking for your expressed milk, most airlines cannot refrigerate your milk for you, but are more than happy to provide you with ample ice to keep it cold. The reason they cite for being unable to chill your milk is that it's a bodily fluid, and because they store food in those fridges, they cannot store bodily fluids as well.

For what it's worth, I've never had a problem breastfeeding on a flight, and I never attempted to cover up. It's a tricky space to be in, but lo how that social media outrage has benefitted the breastfeeding mother. Sure, we still have an uphill battle to support breastfeeding mothers, but little chips are being made. Contact your airline, get it in writing, and hopefully, the skies will be just a little more welcoming to you and your little one.