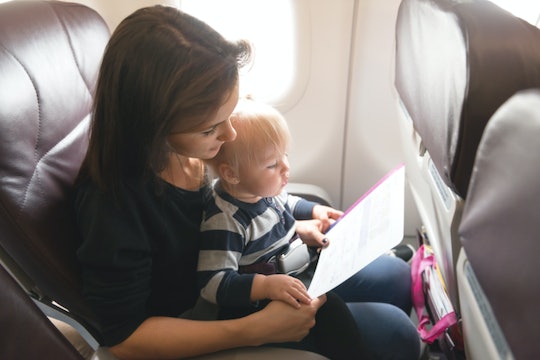 What Are Your Rights On A Plane When Flying With Kids? So Much Can Go Wrong

Flying with kids can be nerve-wracking under the very best of circumstances. Even when all parties involved are being fairly cooperative (meaning, not just your children, but also the flight staff and all the potentially irritable passengers), it can be tough to keep everything under control. But what if your toddler has a meltdown or the airline has seated you two aisles away from your kindergartener? We've all heard stories of families getting booted off of flights for seemingly unfair reasons. So what are your rights as a parent on an airplane?

The issue is a complicated one, even though federal regulations do exist protecting parents and kids on planes (more on that below). That's because flight staff can't always be counted on to enforce these policies (more on that below, too). It's not fair, but it is the reality.

"Parents deserve peace of mind when traveling and that includes not having to get stressed out about how their children will behave," Henrik Zillmer, CEO of AirHelp, an organization that helps provide legal services to airline passengers, tells Romper.

To that end, as the saying goes, "forewarned is forearmed" (meaning, the more educated you are about your rights, the better equipped you are to fight for them). So I took a look at several of the most common challenges parents have to deal with during flights, and what the actual rules are regarding how to handle them. The skies might not always be kid-friendly, but you can try to make them as accommodating as possible!

More Like This
Can Elderberry Help Prevent Illness In Kids? Doctors Weigh In
What Is RSV?
Tips For Apple Picking With Kids
The Best Halloween Family Pajamas To Match Your Boos