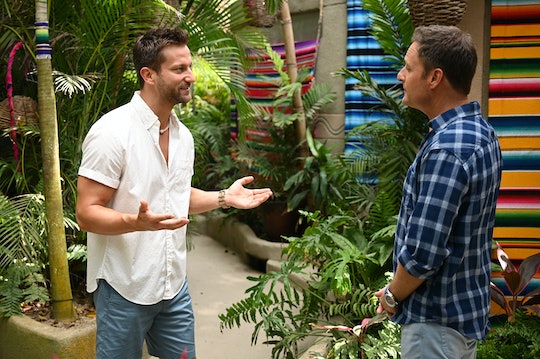 Chris Bukowski Had A Tumultuous Run On 'The Bachelorette'

Bachelor in Paradise's Chris Bukowski found himself the target of some age-related ribbing when he first arrived in Mexico. Though he's similarly-aged to many Bachelor/Bachelorette contestants, this is his record-holding sixth appearance on the franchise, prompting fans to wonder which season of The Bachelorette Chris Bukowski came from. As his track record would suggest, he, like Nick Viall, appeared on multiple seasons of The Bachelorette. But unlike Nick, Chris never made it to the final rose ceremony.

Viewers first met Chris on Emily Maynard's season of The Bachelorette in 2012. He was 25 years old at the time (which makes him 32 now), and he went home Week 8 in 4th place. Fellow contestants on his season included Sean Lowe, who went on to become the next Bachelor, and Arie Luyendyk, Jr., who went on to become a rather controversial Bachelor in 2018. In the end, Emily chose Jef Holm, but they broke up shortly after her season ended. Emily, Sean, and Arie are all happily married now, while Chris went on to make a slew of follow-up Bachelor appearances. In 2015, after his fifth attempt, he announced that he was officially "retiring" from reality TV, and Chris did manage to stay out of the spotlight. But he decided he was ready to return to Bachelor in Paradise this summer.

The summer after Emily's season of The Bachelorette, Chris went on to star in Season 3 of the now-defunct Bachelor Pad, where he came in as the runner-up. Two years later, in 2014, Chris "crashed" Andi Dorfman's season of The Bachelorette, camping out in front of the mansion for a week before filming began and then inviting himself to her first cocktail party. As Us Weekly noted at the time, the strategy was not without precedent; Kacie B. from Ben Flajnik's season successfully crashed Sean's season the year before. But things didn't go so well for Chris. Andi refused to meet with him, citing that it wouldn't be fair to the other 25 contestants she had to meet that night.

"I almost got on as a contestant, but it was too late," Chris explained in Andi's season premiere. Unfortunately, he didn't take her rejection too gracefully.

"I can't give up like this," he told Chris Harrison after Andi rebuffed his advance. "I'm not leaving."

So, Chris memorably got carted away by security... until a few months later, when he showed up as a contestant on Season 1 of Bachelor in Paradise.

He quit Week 3, then came back for Bachelor in Paradise Season 2, then quit again during Week 4. That flame-out ultimately led him to "retire" from reality TV for good in an announcement made on BiP's after show After Paradise. Said Chris, in part:

I'll be honest, I became obsessed with being on TV. It led me stumbling down a long, dark jungle path to embarrassment. I became a joke, but I kept coming back because I truly believed I could find love and fix my reputation on one of these amazing journeys.

His decision was met with applause by the after show's fellow guests and Harrison even presented him with a number 5 retirement jersey. But he's back now after a four-year hiatus.

For his part, Chris does seem to have genuinely matured since his days of fame-chasing. But whether any genuine romantic connections are possible for him in the context of the show at this point is less clear.