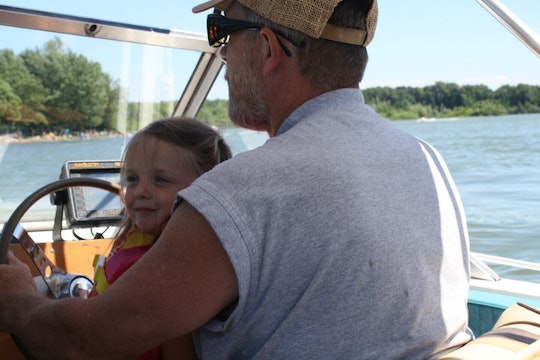 I didn't realize my family was different until about first or second grade. When I started going to my friends’ homes after school I got to see what other parents were like, especially their dads. Up until that point, I naively believed that all dads got drunk every night and never had a job. I thought growing up with an alcoholic dad was the norm, because that was my norm. But at my friends' houses, I saw dads in suits and ties going to work every day, and dads coaching soccer and baseball on weekends. I slowly began to realize that my life was not normal, and I felt a huge amount of shame over my family’s big secret. Right then and there, I made a promise that my kids would never know what it was like to grow up the way I did. I was only 7 or 8 at the time, but I’d fantasize about my future perfect family and promised myself there’d be no screaming, no broken furniture, and no late-night car rides to bars looking for dad. I knew that that my kids would have it better than I did, because even back then I knew well enough to know my alcoholic parent would affect my own parenting.

Once the initial shock had settled, I started spending more and more time at my friends’ houses. I craved that feeling of family normalcy. I’d watch in awe when dads took my friends to church or helped them make breakfast. My dad, on the other hand, just yelled a lot and smelled funny... that is, when he was around. In between his binges and late nights he’d sporadically try to be a decent dad. He’d try to teach my sister and me how to change the oil in a car, or how to change a tire. Looking back, they were skills I probably should’ve listened to, but I couldn't ever get past the smell of liquor on his breath to take anything he said to heart.

At home, there was no secret about what my dad was. The first time he got arrested for a DUI, my mom just laid out the truth for my twin sister and me. I think she was probably so tired of covering up for him all the time. I remember the dark circles under her eyes and the way she'd try to hide her cigarettes from us. We couldn’t blame her for losing the ability to sugarcoat his behaviors in front of us anymore. I didn't want to believe my dad was a bad guy, but there was no one to tell me otherwise. I remember wanting to tell my friend the truth about my family so badly on the bus the next day, but the shame stopped the words from ever coming out of my mouth. I was afraid that our family would be judged. I just wanted to be like everyone else so desperately. So I kept the truth about what my dad was a secret. For years.

I went to look in the barn for him, and trudging through the snow in boots and my pajamas, that’s when I saw him. Face down in the snow.

Going to a small Catholic school only made things worse. Compared to everyone around us, my sister and I felt like we were the poor kids with the weird dad for most of our childhoods. When we eventually switched to a more-affordable option (public school) in eighth grade, I realized just how much the change in schooling helped my sister and me cope. In Catholic school, no one talked about their problems at home. But in public school, other kids did. I felt like I could really open up and be myself for the first time. I felt less alone.

One night when I was in high school, my mom was working late; she was an elementary school teacher and must’ve had parent-teacher conferences or something because it was dark, and she wasn't home. It was winter in Michigan and snowing. My sister and I made ourselves dinner and did our homework. When it got late, I realized our dad hadn’t come home yet. Given everything that had happened so far in our lives, the fact that he wasn’t home yet wasn't too uncommon, but for some reason I started to worry. I went to look in the barn for him, and trudging through the snow in boots and my pajamas, that’s when I saw him. Face down in the snow.

Deep down I am a daddy’s girl that never got to be.

I ran to him and saw he was still breathing so I called my sister out and we both took an arm and dragged him to the deck. He woke up all blurry-eyed and slurring. I remember being scared and grateful all at once that he was alive. He came inside and passed back out on the couch. When my mom came home a few hours later, I never told her what had happened. I just didn't have the heart. She’d call us every evening on her way home from school to gage his mood, and I know that, depending on our answers, she drove around the block a few times, secretly smoking, gearing up for whatever would be waiting for her inside. So that night, I made sure she just saw him laying on the couch with a bunch of blankets on him. No drama. No worry.

My dad and I have never talked about that night or how I found him. I'm almost certain he probably wouldn’t remember it if I brought it up, and I don’t have any intentions of ever doing that.

It's been about 20 years since that day in the snow. In those 20 years, my dad spent more time in jail, including a prison sentence for drunk driving. He missed the births of my three children. I took my boys to see him in prison when they were 2 years old and newborn, respectively, and I cried the entire drive home. I prayed that God would protect him in prison, and that he would just get out soon. I hated him being locked away. We get along fine now, but deep down I am a daddy’s girl that never got to be. Sometimes when my kids are acting like spoiled brats I want to scream at them that they have no idea how good they have it, but I always stop myself. They don’t know what I went through. They don’t know the truth. And I’m not sure I ever want to be the one to tell them.

My dad and I have never talked about that night or how I found him. I'm almost certain he probably wouldn’t remember it if I brought it up, and I don’t have any intentions of ever doing that. Instead, I’ll keep it under the rug, just like so many of my other memories from that period.

I’ve asked my dad to tell them when they’re in high school. They'll be faced with decisions over drugs and alcohol at some point, I'm sure, and I want them to know the ways it can ruin a life.

If I learned anything from my upbringing, it's that silence is sometimes much better than stirring the pot. It's probably not the healthiest way to live, but it's all I know.

Amazingly enough, my dad has been sober now for more than a decade. My children don't know him as a drunk. He's just "grandpa" to them. And when he's around, their eyes light up. We’ve talked about telling my kids the truth, and I’ve asked my dad to tell them when they’re in high school. They'll be faced with decisions over drugs and alcohol at some point, I'm sure, and I want them to know the ways it can ruin a life. When that time comes, they’ll hear their grandpa’s story. They’ll know the truth. I don’t want to be the one to tell my kids what my dad was because I can only offer them the viewpoint of the child of an alcoholic. And that point of view is something I hope they’ll never have to know.

I know for a fact that having an addict as a parent affected the way I parent my own children. I try so hard to compensate for the lack of magic and innocence from my own childhood. I never want them to have that walking-on-eggshells feeling I grew up with. I may be somewhat too involved in their lives now — I joined the school PTO, I run clubs, and know all their teachers by their first names — but I can’t help it. I want so badly to give them the things I craved but never had. Those fantasies from my childhood of what my perfect life would look like still poke through. I try to have the perfect home and perfectly happy kids. I married a man who rarely drinks alcohol. Together, we want our children to be confident enough to talk to us about how they feel. I want them to be honest, and never have to lie to anyone about their family. I want them to be proud of who we are, not harboring secret shame.

Growing up with an alcoholic parent affect the choices I make every single day. I order a water at a restaurant instead of a beer. I hardly ever drink in front of my kids. If I do, the guilt sets in fast. I know my kids could not care less if I had a glass of wine with dinner, but I do. I care a lot. I don't know if I’ll ever be able to tell them what it was like to have a dad who was an alcoholic, but I do know they won’t ever find me passed out in the snow, too drunk to see straight.