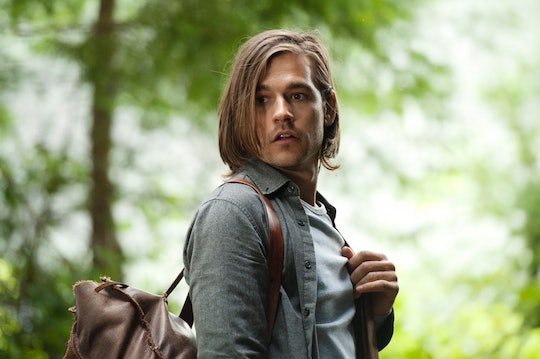 What Book Does 'The Magicians' Season 2 Cover?

Thanks to a well-timed Netflix release of Season 1 about a month before the Season 2 premiere, The Magicians has turned into a sleeper hit for Syfy. The fantasy drama earns plenty of lofty comparisons to stuff like Harry Potter, The Chronicles of Narnia, and Buffy: the Vampire Slayer, and while some of its parallels feel a little derivative, the show's head-on dealings with sexual abuse, clinical depression, rape, and trauma within the fantasy framework of a magical realm feel fresh and creative. The series is based on a trilogy, so what book is The Magicians Season 2 based on? Unsurprisingly, the TV adaptation skips around a lot.

Author Lev Grossman penned three novels in his series: The Magicians in 2009, The Magician King in 2011, and The Magician's Land in 2014. But there are some stark differences between the books and the TV show. For one thing, the characters in the books are in high school, while the show ages them up to graduate students. This helps with tackling some of the mature themes with a little more complexity and nuance, but it's already a steep departure from hewing loyally to the books. The events of the books are also heavily condensed for the show, squeezing Brakebills into a three-year program and organizing the timeline of the show around the school's semesters.

Season 1 covered most of the action in The Magicians, and about half the plot in The Magician King. The "king" here obviously refers to Eliot, who was crowned as the High King of Fillory at the end of Season 1. The Magician King delves deeper into his rule, which we have yet to see on the show. The other storyline The Magician King follows is what happens to Julia after she gets rejected from Brakebills, including her unfortunate run-in with Reynard the Fox. We saw this half of the book play out in Season 1, alongside Quentin's first year at Brakebills.

The Season 2 premiere is titled "Night of Crowns," and we know from sneak peeks that we'll see Eliot's and Margo's formal coronation as a King and Queen of Fillory. (Presumably, Eliot crowns Margo somehow, since we know she doesn't have royal blood innately.) So Season 2 will likely track the half of The Magician King's storyline that actually takes place in Fillory, since we already covered the parts that detail Julia's magical training in Season 1. And then we still have the source material from all of The Magician's Land to go!