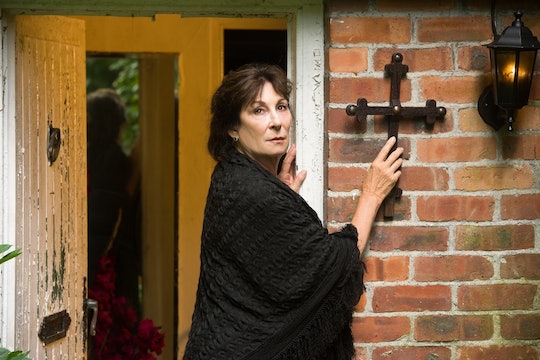 Lifetime's 'The Watcher In The Woods' Is A Spooky Adaptation

On Saturday, Oct. 21, Lifetime is premiering a new version of The Watcher in the Woods, directed by Melissa Joan Hart and starring Anjelica Huston. The creepy tale is about Huston's character, Mrs. Aylwood, whose daughter Karen disappeared under mysterious circumstances years before. The Carstair family comes to stay in the Aylwood house over the summer and are warned by the townsfolk to stay away from the woods because of all the spooky things that happen in there.

Naturally, all sorts of creepiness ensues involving broken mirrors, a carnival fun house, a forest, and possible drowning. It is unclear how closely the new film will helm to either the original movie or the book on which it was based — but it does look like it's definitely going to be somewhat scarier than the original.

A common complaint about both the book and the 1980 movie version is that neither of these stories appear to have anything that looks like a real ending. There is lots of atmospheric tension and weird vibes and creepy innuendos that don't appear to lead to anywhere in particular. One Vulture article from 2014 talked about the 1980 film as being legitimately terrifying as a young child, though clearly flawed when viewed from an adult's perspective:

Characters appear in locations where they would never otherwise appear, simply because the plot requires it; the usual considerations of jobs and school are almost wholly absent. Jan’s voice bears an unmistakable midwestern accent and is delivered in an even shriek of panic the entire film, though Johnson’s earnest delivery keeps us on Jan’s side. The ending of the theatrical rerelease version — now the official DVD version — is so abrupt that we feel like the entire movie was but a fever-dream.

Perhaps in the revived version there will be some re-writing done to wrap up the story more satisfactorily. Although I would probably watch any even mildly frightening movie that starred Anjelica Huston.

A review of the 1976 novel in The New York Times is overall positive, if very brief. The article states:

Her novel's conclusion seems abrupt and incomplete, as if she wrote herself into a corner and escaped by main force. In the end, though, the mirrors are mended. The bereft old mother finds solace. The Carstairs family trusts themselves and each other.

But the general consensus on the book review site Goodreads is that the book version, while somewhat entertaining, does not compare to the movie version. "It is very rare that I like a movie better than a book, but that is the case here," one reviewer wrote. "Read the book, then watch the movie. See what you think. I felt no closure at the end of the book. It wasn't terrible, but definitely not my favorite." While I tend to believe that the book version of a story is always better than the movie, this instance prove to be an exception to my general rule.

In any case, I'm excited to see this new version of the old classic. Perhaps they've made some important changes, or perhaps they've simply paid homage to the original version. In any case, it's gonna be good.