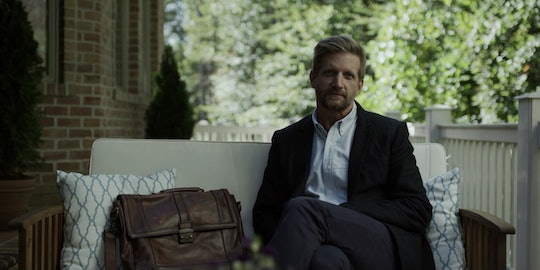 What Book Is Thomas Yates Writing On 'House Of Cards'? The Novel Could Hurt The Underwoods

Tweed-clad, whiskey-soaked, human five o'clock-shadow Thomas Yates is back on House of Cards Season 4, where he returns as the brooding novelist working on an erstwhile biography of Frank Underwood. Since sharing a little too much info. with the conniving president, Yates has been effectively blackmailed into publishing the book as a work of fiction not-so-subtly inspired by the Underwoods, after refusing to deliver what was essentially a piece of propaganda propping up Frank's miserably failed America Works (known as AmWorks) plan. But now that he's back, what book is Thomas Yates writing on House of Cards, and how is Frank hoping to use it to his advantage? (Fair warning: Episode 8, Season 4 spoilers ahead!)

In Season 4, Yates meets with the Conways, the young, hip GOP couple trying to wrestle the White House away from Frank, and reveals to them that the book he's working on will now be marketed as a work of fiction, due to its unflattering portrayal of the Underwoods.

Will Conway cleverly deduces that the Underwoods would still be quite recognizable as the inspiration for the story, and tries to leverage the meager sales on Yates' last book against him. He promises Yates an interview with Vanity Fair and a "literary comeback" cover story in exchange for publishing the novel in time to tank Frank's reelection campaign.

Yates swiftly turns around and meets with Doug Stamper. He tells Doug about Conway's offer, sharing with him an excerpt from the book to pass along to the president, which he's already shared with the Conway campaign. The Underwoods get a week to make him a better offer. We learn, as Frank thumbs through the chapter, that the book details how icy his marriage to Claire has become, much to the First Couple's disapproval.

But Yates knew this would happen.

He visits Claire, telling her that he needs an ending for the book that works better than his current one (in which the president's wife leaves him). She reminds him of the threat the Underwoods currently have hanging over his head — that he didn't really write his wildly successful debut novel Scorpio, but rather found and finished his roommate's manuscript after he died. That story isn't actually true, as we saw him confess to Frank last season. The real embarrassing secret is that Scorpio was based on stories Yates heard working as a male sex worker to older gentlemen clientele.

In exchange for observing the Underwoods in order to gain inspiration for a better ending for the book — and, of course, halting its release till after the election — Claire offers Yates a role as one of Frank's speech writers, so that it doesn't look suspicious that he's hanging around the White House again. He snaps up the opportunity and rolls over on the Conways.

While it seems initially strange that the Underwoods would allow someone who's capable of doing them harm into their inner circle, Claire notes in a casual bathtub convo with Frank that very few people understand them as a couple. Meechum (RIP Meechum) was one of them, and Yates is one more. Although his portrayal of them is less than flattering, Claire does admit that Yates is perceptive of the complexity in their relationship.

Also, interestingly, Claire doesn't seem to know that the Scorpio origin story the author initially told Frank isn't actually true. Why has he kept her out of the loop? It's unlike the Underwoods to be levying threats with bad information. Either way, it doesn't seem like they'll avoid the embarrassing novel based on their sordid lives coming out — all they can control for now is the timeline.