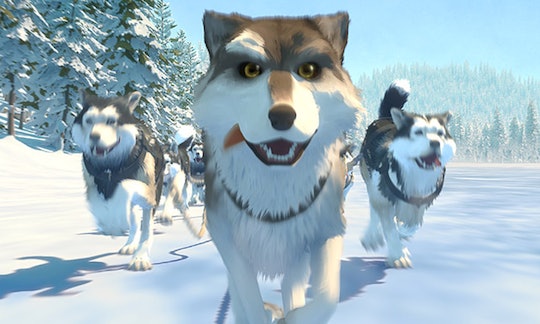 Netflix's 'White Fang' Is Based On This Century Old Classic

Netflix carries a number of animated films and series, including some eagerly anticipated kids' movies likeWhite Fang. Starring Parks and Recreation’s Nick Offerman and Rashida Jones, the animated movie first debuted at the Sundance Film Festival earlier this year, and was quickly swept up by the streamer for a worldwide summer release. If the title of the film sounds familiar, that’s because it’s based on a classic novel. So what book is White Fang based on? This classic has been inspiring readers for over a hundred years.

White Fang is a fictional novel that was written by legendary author Jack London in 1906. The story follows a wild wolf-dog, as he navigates the chaotic world of human life in 1800’s America, with the Yukon Territory and the Klondike Gold Rush set as its background. Written from the point of view of the dog, London’s classic gives a masterful dog’s eye view of human nature and just how wild it can be, similar to his 1903 classic, The Call of the Wild. London’s novels have been captivating readers for generations, and with its new animated adaptation, the story is sure to inspire a global TV audience.

After the publication of Call of the Wild and White Fang, London became known as one of the greatest American fiction writers of his day, but his subject matter was not without controversy. In an article published in 1907, President Theodore Roosevelt openly criticized London and other authors for being “nature fakers.” He attacked them for deceiving “many good people who are wholly ignorant of wildlife,” noted The Hoover Institute. Roosevelt called them “an object of derision to every scientist worthy of the name, to every real lover of the wilderness, to every faunal naturalist, to every true hunter or nature lover.”

But London defended himself in his essay The Other Animals. In it, the author wrote that he was unjustly lumped into the genre of "nature fakery." In the essay, London criticized President Roosevelt, saying, “I endeavored to make my stories in line with the facts of evolution; I hewed them to the mark set by scientific research, and awoke, one day, to find myself bundled neck and crop into the camp of the nature-fakers.”

While defending his depictions of a wolf-dog’s interactions and demeanor, London criticized Roosevelt’s understanding of his novel, science and evolution. “What gets me is how difference of opinion regarding the relative fighting merits of a bull-dog and a wolf-dog makes me a nature-faker and President Roosevelt a vindicated and triumphant scientist,” wrote London, adding “President Roosevelt does not understand evolution, and he does not seem to have made much of an attempt to understand evolution.”

If you take into account the spread of “fake news” today, with masses of internet users being fooled by false news reports and narratives, the “nature fakers” controversy may sound familiar. Some believed that anthropomorphizing animals was misleading and a diversion from science, while others justified it’s value in literature and storytelling. Luckily, over a hundred years later, both factual biological science and fictional animal literature have been able to live and thrive right alongside each other, so stories like White Fang are still able to provide environmentally and emotionally conscious perspectives to human and animal life.

Fans of Parks and Recreation have been anxiously waiting to see favorites, Offerman and Jones, return together as the married human couple who take White Fang in. In an interview with Deadline, Offerman explained that the movie is more than just a story about a dog. “The protagonist in the film is sort of nature, and greed, or consumerism, represented by the Europeans that show up for the gold,” he said. “I just really appreciate that overall message that if you don’t worry about chasing the gold and be nicer to the elements of nature, we’ll all get along a lot better, and have delicious chickens.”

Academy Award-winning director of the 2013 animated short, Mr. Hublot, Alex Espigares is making his feature debut with White Fang. Espigares told Deadline that this movie is a departure from the usual song-and-dance style of animated animal movies. “It’s a movie where the animals don’t speak, they don’t sing. They behave like animals,” he explained. He noted that while previous adaptations have been presented through a human perspective, his version is told through the dog’s perspective. “Here we have, through the technology of CG animation, the opportunity to stay with the dog and be in the dog’s eye view as much as possible, and follow him around.”

So, with an Oscar-winning director and a cast of superstars, White Fang is set to bring London’s classic to life once again, and with the freedom of animation, it will take you on a reflective journey of life through the eyes of man’s best friend.