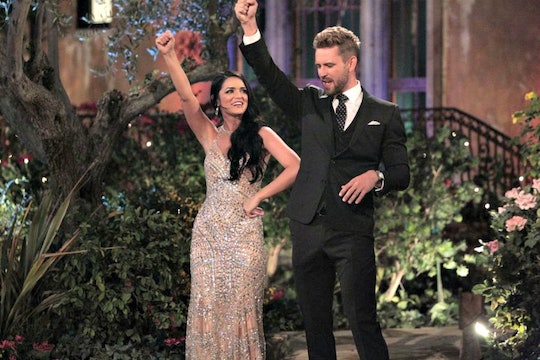 Raven's Talents Extend Beyond 'The Bachelor'

You have to hand it to The Bachelor producers this season for finding way more women than usual that are small business owners. This season, there are three (and Corinne who runs a business with her dad). Michelle Ramkissoon, 24, is the co-founder of Main Squeeze Lemonade, a food truck in Los Angeles. Then Danielle Lombard, a 27-year-old from Los Angeles, who opened an ice cream shop when she was 23 years old. So what kind of business does Raven Gates own on The Bachelor? It's a boutique in Jonesboro, Arkansas called Grey Suede and its sells super cute clothes and accessories.

The boutique has an online shop, so if you want to show the contestant some love (and snag a great graphic T-shirt) you can get it shipped directly to you. Raven is smart — not only does she run her own business, but she's been using The Bachelor as a way to market even more merchandise. There are tanks that say, "Wine Bachelor And Yoga Pants," and a pink sweatshirt you can preorder that says, "Will You Accept This Rosé?" Adorable, right? It's the perfect uniform for the ultimate fan. And a good business tactic — even if Raven doesn't make it all the way, her business will be booming.

The shop definitely has a southern aesthetic to it, which makes sense, given that's where Raven is from. Other tops say, "Y'All," or "Jesus & Football," in case you aren't a member of Bachelor Nation and prefer Monday Night Football.

But it's not all graphic T-shirts with a message. She also sells dresses, sweaters, jeans, and even lingerie. She does it all. But we already knew she was a badass, right? This week, she went on a one-on-one date with Nick and revealed that once, she found out that her boyfriend was out with another woman at a club.

She said that she was embarrassed to admit it now, but she drove like a madwoman all the way to house, rushed in, and pulled him off a woman mid-intercourse. "I saw her vagina," she told Nick, who was totally aghast. (And a little impressed, I think.) Raven proceeded to beat her boyfriend up with the other woman's high heel. A little out there since physical violence is never the answer, but Nick seemed to appreciate her honesty by opening up about the painful story.

What's most ironic about Raven's story is that a local television in Arkansas actually censored the best part and ran a commercial break instead. So Arkansas viewers didn't get to hear about how she put him in his place.

Raven's been getting a lot of attention recently on the show and in the media, so it's possible that this year, we'll get our first small business owner Bachelor winner. And if not, I think Raven is definitely savvy enough to land on her feet and make the most of the whole experience.