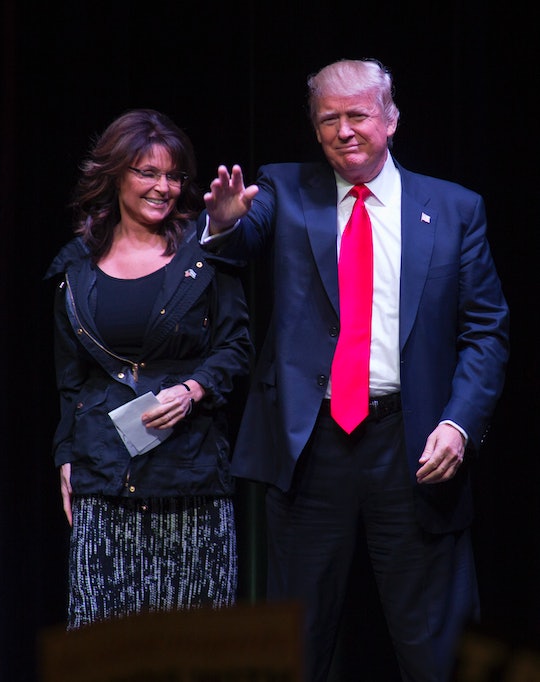 What Cabinet Position Might Sarah Palin Get? She's Open To An Offer

President-elect Donald Trump promised on the campaign trail to "drain the swamp," but now that rumors are circulating about a Cabinet position for Sarah Palin, it seems like the Trump transition team is merely skimming the swamp. Of course, nothing is official yet, but Palin posted an ABC News article to her Facebook page on Wednesday that quoted one of her aides saying that she was under consideration for secretary of Veterans' Affairs. Palin wrote on Facebook, "We should be grateful we'll soon have a Commander in Chief who will champion our vets and honor the promises our nation made."

Palin added, "A pro-private sector individual who surely understands bigger government is NOT the answer; a President who promised to drain the swamp and clean up all government corruption... all things our vets and active duty troops deserve."

The Trump transition team hasn't commented on who it might be considering for the VA secretary, according to NBC News. But a Palin adviser did confirm that the ex-governor would be game to help the Trump administration in any way. "Governor Palin has relayed to the Trump transition team her offer to continue helping the next president either in the public or private sector," the adviser told NBC News.

The former Alaska governor and 2008 Republican vice-presidential candidate has been a Trump supporter and an outspoken advocate for vets and the military. Her son-in-law Dakota Meyer, a Medal of Honor recipient, posted to Facebook last week endorsing Palin for the job. "Just because the GOP won, doesn't mean the battle is over. More than ever we have to push our leaders to remember the promises our nation makes to veterans. And I've never met anyone who supports our troops and loves our country more than my mother-in-law," he wrote alongside a video of Palin interacting with vets and speaking out on their behalf.

Palin stumped for Trump during the primaries, and at a rally last January in Oklahoma, she was criticized for blaming President Obama for vets' PTSD. "They come back wondering if there is that respect for what it is that their fellow soldiers and airman and every other member of the military so sacrificially have given to this country." Palin said, "That comes from our own President. Where they have to look at him and wonder, 'Do you know what we go through? Do you know what we're trying to do to secure America?'"

Palin is not the only candidate for the VA job. Former Massachusetts Sen. Scott Brown also met with the Trump team, allegedly about the position. He said in a statement after their meeting, "I’m not competing with anybody. I think I’m the best person, but there are some tremendous people out there. I don’t look at it as a competition."

"We obviously spoke about my passion and his passion, which are veterans and veterans’ issues," he continued. "Obviously, I think the toughest job in the Cabinet is to lead the VA because while it has so many angels working there, it has so many great problems as well. [Trump] is obviously going to take my application or interest under consideration. I’m glad that he called."

Between Brown and Palin for VA secretary, Trump's really upping the suspense of this transition season. But we'll have to wait and see who gets the final rose.