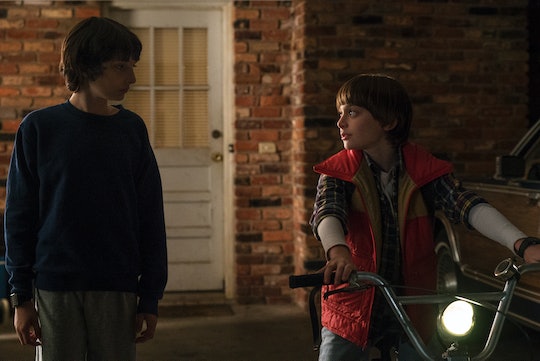 What Came Out Of Will's Mouth On 'Stranger Things'? There Were Some Questions Unanswered

(Warning: This post contains spoilers for Stranger Things Episode 8.) The first season of Stranger Things was a lot to take in. There were aliens (maybe?), supernatural powers (definitely), and a monster that looked just like a gigantic Venus flytrap (don't fight that). But, like any good thriller series, most things seemed to wrap up in the final episode... until they didn't. In the absolute final moments of the season, Will — who had just returned home after being left for dead in the Upside Down — had an, erm, incident in the bathroom that is probably leaving a lot of viewers wondering what came out of Will's mouth on Stranger Things.

Let's rehash what happens in the final moments of the season, shall we? After an exhausting trip to the Upside Down, Will is found by Hopper and Joyce, and finally gets to go back home. Phew. It seems like all is well in the Byers' household until Will excuses himself to the bathroom during a holiday dinner and coughs up... something into the bathroom sink. The goop/bug/thing looked a lot like something that the Upside Down would have caused, and instantly, the feeling of whether or not Will was actually Will, or something majorly bad was wrong with Will came into play.

So, what are the options? Is seems similar to the Upside Down goo, so it wouldn't be surprising to see that there were some remaining marks left on him after returning home. Then again, it would be pretty upsetting to see that he after all that, Will turns out to have something bad inside of him. He certainly didn't seem bad, but he did just cough up a weird goo and proceed to not tell his mom — wtf.

It's not strange for a thriller to end on such a mysterious note. Matt Duffer, of the Duffer brothers (the creators), said told IGN, "We don't want to answer all the questions by the end of the season — there are definitely some dangling threads. The hope is that it feels satisfying but that we left room and that if people respond to it we can go back into this world." Interestingly enough, it seems we have been left with a cliffhanger. Is Will really Will, or is he some type of monster from the Upside Down masquerading as a little boy. It definitely sets up Season 2, which Duffer says, "[But] if we do go back, it's not a second season as much as a sequel."

So, maybe we'll find out what's happening with Will next season, or maybe it will be a completely new storyline that leaves us wanting way more from Will, Dustin, Lucas, Nancy, Mike, Joyce, the whole gang.