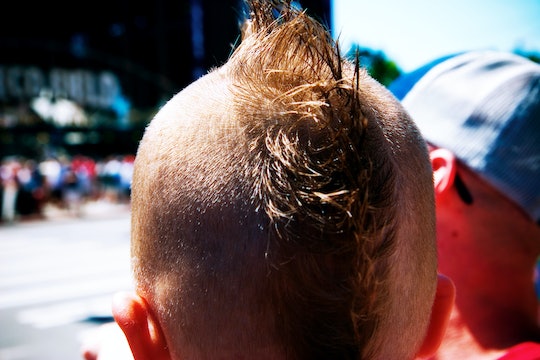 What Can We Learn From Actual Teens About Our Threenagers?

A lifetime ago, before I had a child, my best friend referred to her toddler as a “threenager.” I thought it was funny, cute. Her little redhead is a fiery spirit with natural sass and a gift for posturing for the camera. I didn’t consider the possibility of this epithet being observationally, and certainly not scientifically, accurate.

Three years later, I found myself boarding a plane with my own daughter, nearly 2, to visit cousins on the West Coast. The oldest, a furious 16-year-old with a pierced nose and penchant for wearing black, seemed at first to have more in common with a mythical vampire than with my tutu-loving toddler. She would crash into bed as my toddler was rising to meet the sun. She cried when her dad threw away her cigarettes the way my child cried when I denied her a second scoop of ice cream. It was lipstick versus crayons. Shopping versus sliding. Pick-up trucks versus scooters. The only thing the two seemed to share was a passion for Goldfish and frozen waffles. And cellphones. The furious teenager spent most of her waking hours doing exactly what my daughter always wished she were doing — pouting over a screen. Something about her love for snapping selfies reminded me of the joy my daughter takes in opening my photo stream and identifying herself over and over and over again.

We got angry, we laughed, but the truth is, our girls were both struggling to regulate their emotions.

This shared narcissism really caught my attention on a family outing to the beach. Everyone was happy to be near the water, swimming and sprawling out to nap and read. Everyone but the teen and the toddler. The furious teenager sat with her knees bent, phone resting on the incline of her thighs, raging unhappily to her boyfriend via FaceTime about the injustice of having to go to the beach when she wanted to spend the day downtown. I was jarred out of a false relief that my own child was too young for angst by my daughter’s animal cry.

She’d tired of her bucket, and was beginning to melt down because my cousin wouldn’t let her fill the cooler with sand. I tried to distract her — a fancier beach toy, a hat, a snack, a water bottle. She tossed each one aside with a vehement “No.” For one incredible moment, the discordance of the teenage rant and the toddler tantrum blurred into a striking harmony of discontent. I looked at my cousin, father of the furious teenager, and asked, “Does it feel like having a toddler all over again?” I thought he would laugh, but he was very serious when he answered, “Yes, but it’s even worse. They get in a lot more trouble.”

As the week wore on, it began to get competitive. Whose fury would cause the most chaos? Ruin the most meals? We got angry, we laughed, but the truth is, our girls were both struggling to regulate their emotions. I hugged the furious teenager as she shook and cried because her boyfriend had gone out with friends instead of staying home to video chat just as I held my daughter as she shook and cried because it was time for her nap. While I recognized that such earth-shattering reactions were grossly disproportionate to such minor dilemmas, I also understood that the suffering itself was real. Both girls genuinely felt like the world was crumbling around them. As tempting as it might have been to blame them for this narcissism and lack of self control, the real culprit here was the prefrontal cortex.

I’m going to oversimplify for a moment and say that the prefrontal cortex is the executive control center of the brain. It plays a crucial role in problem-solving, impulse control, and rational thinking, and it takes years to develop. While it seems that this region should, and does, evolve in a linear fashion — after all, the average 8-year-old is far more masterful at controlling their emotions than the average 2-year-old — this is not quite how it works.

As children approach the threshold of adolescence, this region of the brain takes a back seat, and the amygdala (let’s call it the heart of the brain’s emotional center) takes control. This means that emotions, rather than logic, motivate a good deal of teenage behavior, and without the moderating influence of the prefrontal cortex, teenagers experience these emotions with alarming intensity. Kind of like toddlers do. In her enlightening Washington Post article “Want To Keep Your New Middle-Schooler Out Of Trouble? Then Let Them Take Risks,” Michelle Icard explains that this isn’t a regression but a vital step in establishing independence. If this didn’t happen, teenagers would never be reckless enough to detach from their loving caregivers and hurl themselves into a scary, often un-loving world. But it still seems a bit like a devolution. All of a sudden, your teenager is acting like a threenager again. Except now, it’s not milk in the bottle, it’s tequila. As my cousin said, it’s similar, but much, much worse.

My cousin and I talked a lot about the struggles we faced managing our daughters. The qualities we are most proud of — our girls’ indefatigable spirits, strong wills, appetites for life and generally vociferous natures — also most terrify us. And we are both afraid for the same reason: our daughters are on the precipice of a huge leap toward independence, and it’s not easy for any of us. My daughter suddenly wants to do everything by herself — eating, dressing, climbing up the slide. My cousin’s daughter wants to be everywhere by herself — downtown, with friends, in her room. They are trying out their autonomy, testing every boundary. How late can they push bedtime and curfew? How long can they go without washing their hair? They want to see how far they can stray without us, and we have to let them go, even though we know that they will, inevitably, get hurt. Skinned knees, broken hearts, disillusionment. We can’t protect them, we agreed. All we can do is hold them when they cry because someone said they had a flat butt, or tried to buckle them into a car seat.

The amount of time my daughter spends running around outside is in direct proportion to the amount of time she spends whining. The satisfaction she derives from scribbling on paper and banging on drums is immense.

We can also teach them how to redirect their energy. Try as we might, we’re never going to tame our toddlers’ and teenagers’ emotions until the prefrontal cortex is ready to step in and works its magic. Once we accept this, we can work on directing their emotions toward positive outlets. The amount of time my daughter spends running around outside is in direct proportion to the amount of time she spends whining. The satisfaction she derives from scribbling on paper and banging on drums is immense. These are just starting points that I hope I can nourish as she gets older, so when she reaches adolescence, she can be edgy and bold and wail as loud as she needs to with minimal damage.

Exhibiting compassion while imposing discipline is not easy, especially when your child is thrashing on the floor because you won’t let her rub Vaseline all over her stuffed animals, but it’s more important than we think. When we manage our toddlers, we are practicing for a future where the stakes are much higher. We may not be able to tame our “threenagers,” but we can understand them, and plant the seeds for a potentially smoother ride.