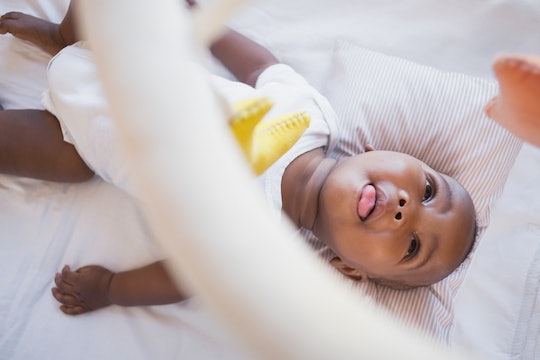 Damn those fancy looking baby linen catalogs with their cute spreads of decked out cribs. Why must they tease us parents-to-be with appealing photos of nurseries featuring cribs with soft-looking bumpers, decorative accent pillows, and huggable stuffed animals? Many of us have made the rookie mistake of registering for these baby items, only to find out that almost none of them are allowed in baby's crib, anyway. So, just what can you have in your baby's crib? Turns out, not much.

According to the American Academy of Pediatrics (AAP), you can't put much in a baby's crib until your baby is at least 1 year old. Up until that point, the AAP recommends only putting a tight, fitted sheet in the crib. More specifically, APP encourages parents to "avoid use of soft bedding, including crib bumpers, blankets, pillows, and soft toys. The crib should be bare." Other objects that the AAP warns against using in the crib include wedges or positioners, and commercial devices marketed to reduce the risk of Sudden Infant Death Syndrome (SIDS). So those beautiful pictures of gorgeous cribs with cute stuffed animals and comfortable-looking blankets and soft pillows? Yeah, those are a no-go, my friend.

The reasons for keeping your baby's sleeping space clear? The fear of SIDS, which, the AAP notes, are sleep-related deaths that affect 3,500 infants each year in the United States. All that fluffy and frilly stuff that looks nice in Instagram photos of baby nurseries can be devastating if a child were to suffocate on them. As The Mayo Clinic States in their article on SIDS prevention, these are all objects that "may interfere with breathing if your baby's face presses against them."

According to a study released by the AAP in 2016, despite the warnings about the risks of SIDS, parents and caregivers continue to put babies (ages 1 to 6 months) to sleep in unsafe sleep environments. (Unsafe sleep environments, as defined by the study, included bumper pads, pillows, stuffed animals, and sleep positioners.) This is pretty disturbing news, but not surprising, as many a sleep-deprived parent may be familiar with having made some not-so-great choices in the middle of the night when it comes to trying to get themselves and their baby back to sleep.

Some parents also worry that their infant's limbs might get caught between the slats of a crib, and therefore look to use a bumper to protect against that happening. But pediatricians say that this isn't even a necessary worry. Dr. Rachel Moon, of The Children's National Medical Center in Washington, DC, as quoted in Parenting, says:

"While it is possible for a baby to get an arm or a leg stuck between crib slats, it’s virtually impossible to break a limb by doing so — which means that at most, the experience will be uncomfortable and upsetting, but not life-threatening, until a caregiver arrives to help."

The bottom line? An infant's crib must be pretty barebones in order to be safe. So you'll just have to get creative with the rest of your nursery decor, like cute wall decals and adorable crib sheets. Happy decorating and (hopefully) sweet dreams for all!