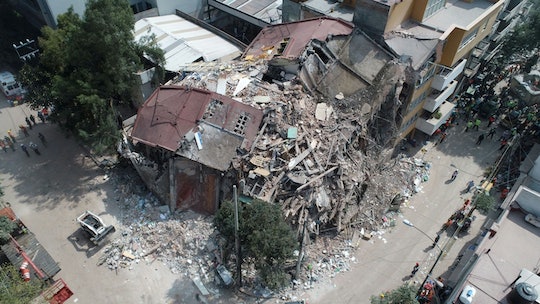 Here's What Experts Think May Have Caused Mexico's Recent Earthquakes

Mexico just cannot get a break. Two weeks ago, an 8.1 magnitude earthquake struck and killed dozens of people. On Tuesday, a deeper earthquake struck Mexico City and its surrounding regions, killing more than 200 people. So what caused Mexico's earthquakes and were they predictable? Is there ever anything to be done? According to CNN, most of the damage and death happened in Mexico City, since it's so densely populated, but the epicenter was actually father away, in Puebla.

The cause of the tremors began 30 miles deep and happened for just 20 seconds, but the shaking energy reverberated for almost two minutes, crawling through the valleys and mountains in the region. The cause was simple plate tectonics — or modern continental drift — which is what causes most major earthquakes, according to Live Science.

Usually, the Cocos Plate moves along the coast of Mexico and slides under the North American Plate, moving about three inches a year. However, seismologists believe that Tuesday's earthquake was caused by "crumpling," which was the result of the Cocos Plates sinking a little bit and not the plates slipping into one another. It's kind of crazy, right? But everything up here on top is affected by the painfully slow movement of those plates miles below the surface.

There's not a whole lot that can be done to prevent earthquakes, but you can protect people and structures from them. Mexico City, because of its location, is prone to earthquakes and especially vulnerable to them. According to experts, the soil there is super soft and wet, which means that it amplifies the shaking energy as it moves through the ground.

To get a better idea, picture that Jell-O shaking in Jurassic Park when the girl hears a T-Rex coming. The soil in Mexico City sort of pushes the vibrations of the initial tremors along much like the T-Rex's footsteps rumble through the floorboards, causing the city to tremble like jelly.

So it's not the initial earthquake that caused all of those old buildings in Mexico City to crumble this week, it was the minutes after the initial shake that dealt the final blow.

Tuesday's earthquake was the 34th earthquake to strike Mexico City with a magnitude greater than 7.1, though smaller ones happen all the time. One might assume that the Sept. 8 quake and Tuesday's were connected, but the epicenters were about 400 miles away from each other.

John Bellini, a geophysicist with the U.S. Geological Survey, told The Verge, "Usually to have something directly related, they happen within minutes of each other, whereas this has been a week and a half. But I’m sure somebody will study that to see if there’s any kind of relationship.”

The thing is, earthquakes can happen whenever, there's not a season or something. Luckily, Mexico has an early warning system for earthquakes, which means scientists can detect shaking around the epicenter and then warn residents in the surrounding areas to get to safety. According to initial reports on Tuesday, the system seems to have worked like it was supposed to. Although given the casualty rates, more can likely be done to reinforce older structures and help people evacuate as quickly as possible next time.

According to Quartz, the United State's early warning system for earthquakes would be quashed with President Donald Trump's new budget proposal. The USGS predicts that there is a 85 percent chance of a magnitude 6.7 or larger earthquake in California within the next three years. Likewise, the Pacific Northwest has a 10 percent chance of a more disastrous 8 or 9 magnitude earthquake within the next 30 years. Again, earthquakes are unpredictable, but when it comes reinforcing buildings, bridges, and freeways or making sure states have working emergency warning systems — time if of the essence.

Hopefully, Mexico City's catastrophe will mean legislators in the United States will make infrastructure and disaster prevention a priority as soon as possible. Because once the shaking energy starts, it's only a matter of time before cities start shaking like that Jell-O.