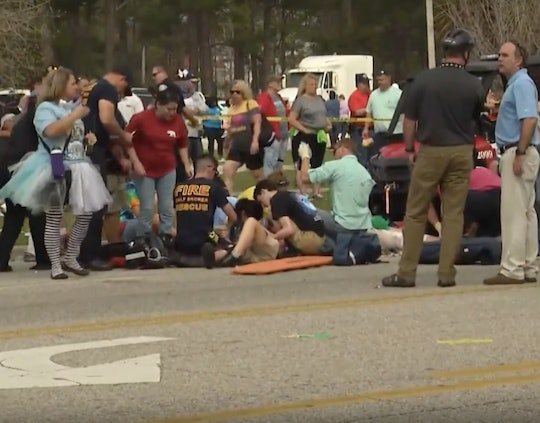 Amid a festive celebration on Tuesday afternoon, an SUV ran into a group of students, injuring 12. Included in the group was the Gulf Shores Marching Band, which had been leading a Mardi Gras parade at the time of the incident. CNN reported that a 73-year-old man accelerated his car into the band, according to authorities. So what caused the Alabama Mardi Gras parade car crash?

Gulf Shores Police Chief Ed Delmor shared that "every indication is that it was a tragic accident by an elderly man," while city spokesman Grant Brown insisted that, as of midday Tuesday, there was no indication that drugs or alcohol were involved in the accident.

According to a report by CBS affiliate WKRG, the SUV involved in the accident was reportedly there representing the Military Officers Association of America, and was being driven by an elderly member of the group. Witnesses told a local news crew that the driver's foot slipped from the brake pedal and onto the gas, causing inadvertent acceleration into the group of marching band members. As a result, four students remain in critical condition. All of the victims injured are students, aged 12-17.

The Gulf Shores community was shaken by the event. A statement provided by the Baldwin County School System on Tuesday noted,

We are yielding to the Gulf Shores Police Department regarding details that are available concerning this unthinkable incident. Right now our thoughts and prayers are with the Gulf Shores High School family. We greatly appreciate everyone’s thoughts and prayers, especially for those who have been injured and their families. I want to thank all the EMS and law enforcement professionals who responded and are still assisting families. I especially want to thank the Gulf Shores Police Department and Fire/EMS. We will continue to provide updates as information becomes available.

Unfortunately, this isn't the only Mardi Gras parade car crash in recent days. In New Orleans, on Feb. 25, an allegedly intoxicated driver ran his truck into a crowd mid-celebration, injuring at least 28 people. The driver, 25-year-old Neilson Rizzuto, has since been charged with "two counts of first-degree vehicular negligence resulting in injury, and one count each of reckless operation and hit-and-run driving," CNN reported. According to Reuters, Rizzuto reportedly had a blood alcohol content level of 0.232; The legal limit is 0.08

What was meant to be a happy celebration on Tuesday turned dark. The community’s fast response to the circumstance, however, was vital in minimizing the impact of the crash. The FBI is reportedly investigating the incident further, hoping to get some answers for the victims, their families, and the community at large.