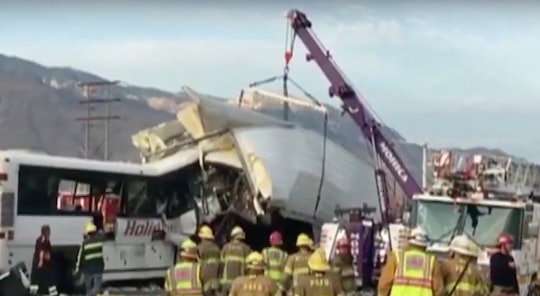 As many as a dozen or more people may have died, and many others were reportedly injured, in a two-vehicle accident on a Southern California interstate early Sunday morning. Details are still hazy as crews work to assess the damage, but The Los Angeles Times reported that a collision between a tour bus and a big-rig truck caused the accident, and that bodies covered in blankets could be seen on the side of the freeway. Early reports indicate that about 30 people were on the tour bus when it crashed.

The devastating collision occurred at 5:17 a.m. local time on Interstate 10, near Palm Springs, according to CNN. The most up-to-date numbers indicate that at least 13 people have died after the tour bus rammed into the back of the tractor trailer. As a result, the front of the USA Holiday tour bus, reportedly driven by one of the Los Angeles-based tour company's owners, actually traveled into the truck's trailer and became wedged inside, The Desert Sun reported.

"The whole front of the bus up to about the second or third row of seats was completely crushed into the left rear side of the semi truck," Poet Aleman, a witness at the scene, told the newspaper. "By the time I got there there were at least a dozen firefighters climbing into the passenger bus pulling people out."

This deadly positioning forced firefighters who responded to the scene to use chainsaws to get into the vehicle and get to the front, where they hoped to access those who were trapped there. Ultimately a tow truck lifted the trailer while another attempted to pull the tractor trailer forward, so that the firefighters, working from ladders, could reach its windows and pull victims out through them, according to The Desert Sun.

The driver of the big rig was not injured, but, according to NBC Miami, at least 31 people were. The driver of the tour bus was one of the injured and was being treated a local hospital. The front end of the bus was totally demolished, and the Desert Sun reported that all of the patients who were transported to area hospitals were adults. Of the 14 who were taken to Desert Regional Medical Center, six had minor injuries, while five were in critical condition and three were listed as "serious," a hospital spokesperson told the Sun. The 11 who went to Eisenhower Medical Center had minor injuries, as did the five at JFK Medical Center.

The tour bus had previously departed from the Red Earth Casino, near Stalton Sea, California, and was headed to a location in Los Angeles.

Of course, there are still many unanswered questions as authorities get to the agonizing task of alerting the families members of the dead about the fate of their loved ones. The California tour bus crash is an unmitigated disaster, and a full investigation will surely determine why, exactly, the tour bus crashed into the truck as it did.