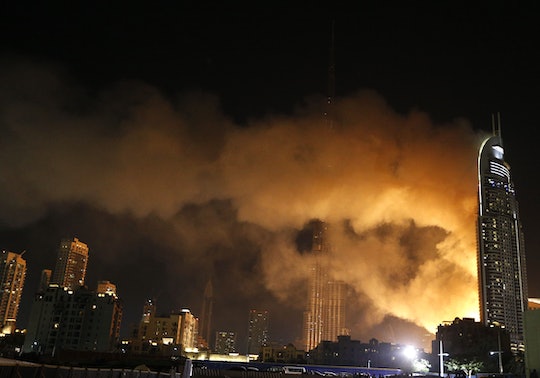 What Caused The Dubai Fire? The City Celebrated The New Year As A Hotel Burned

Dubai's New Year's Eve took a terrifying turn when the Address Hotel went up in flames. What caused the Dubai fire? The cause hasn't been formally identified, but officials are working to determine what happened. During a live broadcast, CNN reported that one of their sources claimed the incident began with a curtain that caught fire on the 20th floor. When asked about the possibility, former New York City Police Commissioner Bernard Kerik told anchor Fredricka Whitfield that it seemed unlikely, evidenced by the fast spread of the fire. Terrorism is a concern, but CNN reports that "there was no immediate indication" of that as the cause.

According to Al Jazeera, the Dubai fire engulfed virtually all of the hotel's 63 stories. On the ground, it appeared that flames had wiped out an entire side of the building. Al Jazeera reported that thirteen people are injured and one person "died after suffering a heart attack while trying to run away." BBC News placed the number of people injured in the hotel fire at 16, while Reuters reported 14.

Despite the fire, New Year's Eve celebrations went on as planned. The BBC reported that 2 million people would attend the midnight fireworks show in the city. Though the big event is over, the fire continues to burn. Fighting it is difficult: the Address Hotel is 1,000-feet tall. Of considerable concern is the hotel's proximity to the Burj Khalifa, the world's tallest skyscraper. According to Reuters, the Burj Khalifa stands at over 2,700 feet and served as the gathering point for much of the New Year's Eve crowd.

Reuters reported that a resident called the hotel's evacuation process "absolute pandemonium."An unidentified medic said, "There are more than 60 people injured with light injuries from smoke inhalation and from crowding while in the stairs evacuating the building." The Dubai Media Office tweeted that they would find alternative accommodations for all those displaced by the fire. The Telegraph shared a story from Kenneth Flynn, who was inside the hotel with someone when the fire started:

I went outside to have a look and by the time I walked out the whole building was just ablaze. The heat was so intense outside.

It was unbelievable. By the time I came back in I had lost her because the whole place was in panic and people were crushing each other trying to get out and get down the stairs and jumping over railings, I couldn’t believe how fast it actually happened.

Flynn said that he never heard a fire alarm. The Telegraph confirmed that fire alarms did not "initially" go off at the hotel. Luckily, it appears as though the majority of people inside escaped unharmed. Whether the hotel fire is the result of an accident, terrorism, or something else remains to be seen.