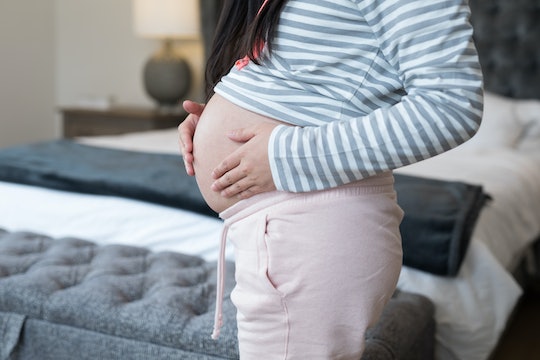 The Top Theories On What Causes A Breech Baby, According To An Expert

When I was 36 weeks pregnant with my second child, I was given the truly crappy news that at some point between the previous appointment and that one, my daughter managed to flip herself upside down, and was now butt first in the birth canal. If something didn't change, she would be born via C-section. At that point, I started doing my homework. I needed to understand what happened. What were the top theories about what causes a breech birth? Why does it happen?

There are myriad reasons why a baby might turn to a breech position during the course of their gestation. In the beginning of the pregnancy, babies move all of the time, according to the Association for Improvement of Maternity Services (AIMS). That's because, in the early stages of pregnancy, they have the room to do so. That movement — which does end up making your abdomen look like an alien is about to tear through it a la Ellen Ripley — doesn't become abnormal until the third trimester, noted AIMS. At that point, the baby is more likely to turn into the breech position, and stay in that presentation, if it is a multiple pregnancy, if the mother has an abnormally-shaped uterus, or if there is a peculiar level of amniotic fluid, reported the American Academy of Family Physicians.

I contacted Daniel Roshan, M.D., F.A.C.O.G, F.A.C.S, director of ROSH Maternal-Fetal Medicine in New York City to find out the top theories about what causes a breech baby. He tells Romper that the "etiologies for breech presentations are fetal anomalies, uterine anomalies such as an abnormally shaped uterus, a fibroid-filled uterus, a tight pelvis, or not enough room for baby." It might also be a "tight nuchal cord, too much or too little amniotic fluid" but sometimes, there are no good reasons, and it's just unexplained.

There are also a ton of old wives' tales about why babies would turn into the breech position, and believe me, I heard all of them at some point. One older woman told me that my daughter turned breech because I insisted on taking hot showers. (Not sure how she knew.) My MawMaw told me it was because I didn't spend enough time scrubbing floors. Apparently, being on your hands and knees all of the time keeps your baby pointed the right direction. My husband's grandmother, on the other hand, said that my baby just wasn't ready to come out, so that I should light incense by my toes and hold a candle next to my undercarriage so that she would turn. (Go into the light? Worth a try.)

"If there is no contraindications, the OB-GYN could attempt to turn the baby manually from outside — called external cephalic version — usually done at 37 weeks," Roshan says. My OB-GYN attempted this, and my daughter did not budge. Not even a little. I could almost picture her holding on to my ribcage like handlebars screaming "Not, today, doctors!"

Her stubborn personality has persisted, if you were wondering.

If the external cephalic version doesn't work, Roshan says that you could try acupuncture or moxibustion, which is a traditional Chinese therapy where the moxa — a tube full of mugwort — is burned near pressure points, and then the warmed moxa is pressed against the skin. Now, I am not one for non-traditional therapies. I love all of the double blind researched studies and treatments that Western medicine has to offer. But readers, after two sessions of getting needles up and down my legs and having the moxa burned by my toes, my daughter turned. She was delivered in an uncomplicated birth a few days later.

We might not always know why our babies decide to go butt down, but it doesn't mean it's hopeless.

More Like This
Pelvic Pain During Pregnancy: What Causes It & How To Deal With It
Yes, It’s Possible To Get Pregnant If You Have An IUD
40 Fantastical Boy Names That Start With “F”
7 Surprising Old Wives' Tales About Christmas Eve Babies