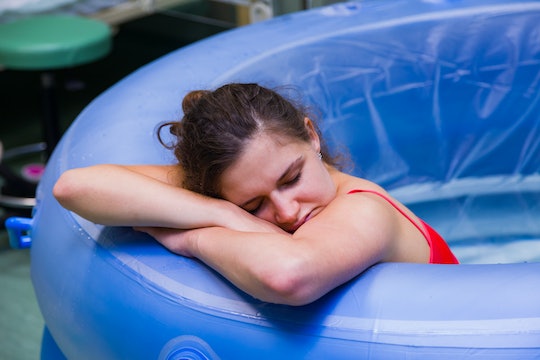 A Fast Labor Sounds Nice, But Here's What Experts Say Actually Causes One

When I went into labor with my son, I thought I'd be doing it all day. I'd gone to childbirth classes and talked to my OB-GYN, and she assured me that first-time moms take a long time to deliver. Little did I know that my labor would progress so rapidly that I'd barely be able to catch my breath between contractions by the time I got to the hospital. But, why did it come on so quickly for me? What causes a fast labor? Is it genetic? I always wondered after learning that my baby brother was born almost at the door of the hospital, and listened to my MawMaw regale me with tales about how my uncle basically shot from her womb like a canon.

An unusually fast labor, also called a "precipitous labor," is a labor that progresses extremely quickly. From start to finish, precipitous labor is defined as a labor that goes from start to finish in under three hours, according to the Journal of Clinical Medicine Research. Researchers wrote that the main factors that are attributed to the likelihood of experiencing one of these rapid-fire births mainly have to do with age, health, how many children you have already given birth to, and heredity.

So, what causes a fast labor, and can you predict one? I contacted Linda Rice, CNM of Chelmsford, Massachusetts, and she tells Romper, "The bottom line to that question is we don’t know. We know there are certain conditions associated with fast labors." It is one of those frustrating — mostly mysterious — occurrences that baffle the medical community. The conditions they know are associated with fast labor are not a guarantee, but Rice says the health of the mom and pregnancy are important factors.

Take moms with preeclampsia, for instance. Rice says that "women with preeclampsia tend to have faster labors." Also, women who are experiencing "a condition called 'abruptio placentae,' or a placental abruption" are more likely to have precipitous labors. Placental abruption "is a condition where the placenta begins to separate from the uterus and can be life threatening for both the fetus and mother. Symptoms include very frequent contractions or constant pain and hardness in the uterus, as well as vaginal bleeding." Another maternal health-related reason for fast labor is preterm labor or mothers who use drugs while pregnant. Both are risk factors for quick births.

However, there are more benign reasons as well. Rice says that Asian women are more likely to experience quick births and women with a history of fast labors in their family are, too. In the end, it's a guessing game.

In the past few years, I have had three different friends give birth somewhere other than a hospital because their labor came on so quickly. One had her baby in the minivan in her driveway, one girlfriend gave birth in a cabana on the Jersey Shore, and another girlfriend gave birth in the lobby of her building in front of the elevator just a few months ago. I was lucky enough to just barely make it to the hospital, but my labor was merely fast, not "precipitous," as theirs were.

I spoke to cabana mama Nikia Chisolm, 33, and asked her if she thought that this was at all a possibility or if her OB-GYN thought it might happen. She tells Romper, "Sorayah wasn't due for another 15 days, and I wasn't far from the hospital where I was going to deliver her. I felt sort of achy and weird that day, but I didn't think anything of it. I went to the beach to cheer myself up, not have an unconventional water birth." She said her OB-GYN thought she might actually go late, and because she's so narrow through the hips and pelvis, that she might end up needing a C-section. Therefore, when her indigestion turned into to the urgent need to push, she was quite taken aback. All three of my friends had healthy, robust babies, but Sorayah took the biscuit at a whopping 9 pounds of dimpled adorable baby.

Basically? There's no real rhyme or reason why someone might have a super fast labor. So talk to your OB-GYN and listen to your body. If your family has a history of fast labors though, maybe keep your phone nicely charged as well.