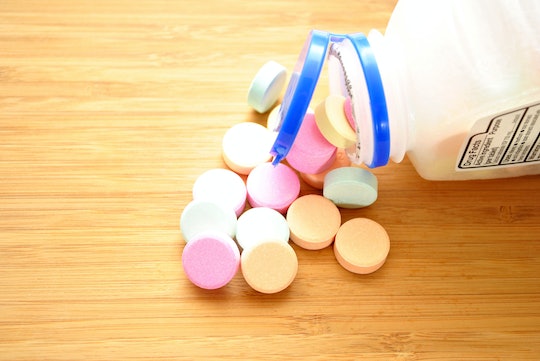 Here's Why You Have Heartburn During Pregnancy

When I was pregnant, I had reflux so bad I was reasonably certain that I was part dragon, and only learning to breathe fire in my 20s. It's a common occurrence for moms-to-be, but what causes heartburn during pregnancy? It's actually pretty simple, and also a big pain.

It turns out that not only is heartburn a common pregnancy-related ailment, according to the American Journal of Lifestyle Medicine, but that some portions of the population are more prone to experiencing gestational reflux than others. For instance, The United Europe Gastroenterology Journal found that women who conceived via in-vitro fertilization were more likely to suffer from heartburn in their pregnancies than whose who conceived via intercourse. The Blackwell Journal of Obstetrics and Gynaecology (BJOG) found that women who became pregnant while at an unhealthy body-mass index (BMI) were also at a higher risk of suffering from pregnancy-related reflux than those who conceived when at a healthy weight.

While it is mostly considered a quotidian reality for many pregnant women, what causes heartburn during pregnancy is mostly one of those things we don't think about, unless we're suffering from it at the moment. Was it something we ate? Is it how we're sitting? Is it this human I'm making?

Yes. It is all of those things. You're welcome. More specifically, it is a combination of issues that culminate upon the sacrificial pyre that was formerly your esophagus. During pregnancy, your body has more progesterone swimming around than when you're not making a person, and that hormone causes the valve between the esophagus and the stomach to relax, sending gastric juices where gastric juices should not be, irritating the lining of the esophagus, according to The American Pregnancy Association.

Excess weight associated with elevated BMIs and the general nature of progressing pregnancy, presses on the stomach, forcing the juices upward and through the sphincter, creating the environment necessary for the discomfort of reflux according to BJOG and Digestive Diseases and Science.

As for why it's more common in women who have conceived via IVF, it's posited by The United Europe Gastroenterology Journal, that women who get pregnant through in-vitro fertilization are pre-disposed to be at greater risk due to anxiety, aspirin usage, hormone utilization, and because the pregnancies are, according to the article, more likely to require immobilization of the mother, and increasing the pressure on the valve between stomach and esophagus.

What can be done about it? The American Journal of Lifestyle Medicine suggests a few things like eating smaller meals, avoiding foods notorious for causing reflux, avoiding lying prone for three hours after eating, and shirking off that caffeine problem. While there are drugs that are considered safe during pregnancy, always talk to your doctor before taking anything for your heartburn.

For what it's worth, anecdotally, I found that sleeping in a semi-reclined position and drinking a metric ton of water to be very helpful, as was avoiding acidic foods, and making sure I moved my body. Unfortunately, what causes heartburn during pregnancy is just that — being pregnant. Real bummer, right? Pass the Tums.