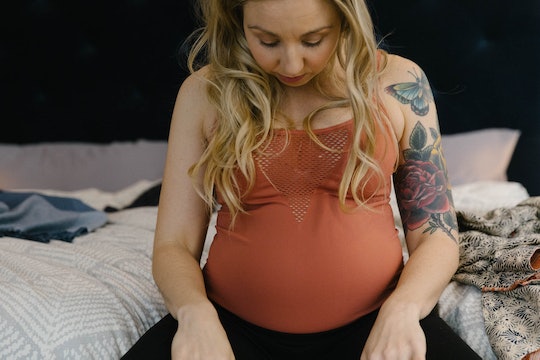 Pregnancy is just full of delightful little surprises. Most of us are pretty well prepped for the most obvious symptoms of gestation: We know to expect nausea and food aversions in the beginning and anticipate some back pain in the end. The things we don't anticipate are the ones we don't hear about as much, like heartburn, sciatica, PUPPs, and that weird sharp pain that hits down there every now and then. It's been called "lightning crotch" and now that I'm familiar with it, I can't argue with the accuracy of the moniker. But what causes lightning crotch, and is there anything to be done about it?

In case you haven't had the delight of actually experiencing lightning crotch for yourself, allow me to explain the sensation. You know that absolutely perfect little bundle of joy you're carrying so idyllically in your womb? Imagine she has a blunt object in her teensy little fist and entertains a whim every once in awhile to, out of nowhere, jab you in the vagina with it.

It's precious, I know.

SELF magazine reported that lightning crotch could be caused by aggravated nerves. Since the majority of uterine nerves are located right by the cervix, if one of baby's body parts is pressing on your cervix, those nerves are going to be the first to know.

This theory could explain why lightning crotch is more commonly seen at the end of pregnancy than at any other stage. But there could possibly be more to the story.

OB-GYN Dr. Peter Ahlering told SELF that varicose veins in your labia and vagina during pregnancy could be the true culprit here. Blood flow down below doesn't move upward as well as it does in your non-pregnant state, so the accumulated pressure can cause dilation of the veins in your lady bits. You could possibly have vaginal varicose veins and not even know it. (Have I ruined your day yet?)

One other possibility could be a vitamin deficiency, specifically that of magnesium. According to the website Mama Natural, magnesium is an important component of proper nerve function, and a deficiency could cause sharp nerve pain, muscle cramps, and sciatica. If you think this could be the problem, double check the ingredients on your bottle of prenatal vitamins to make sure your hard working bod is getting exactly what it needs.

Lightning crotch is certainly a common pregnancy occurrence, however it's important not to mistake it for something potentially more serious. If you're still early on in your pregnancy — particularly in the first trimester — you should be wary of sharp pains. The American Pregnancy Association (APA) warned that if the pain is localized on one side, it could be an ectopic pregnancy, which requires immediate attention from a professional. The APA also reported that a miscarriage can cause similar sharp pain as well.

A good rule of thumb is to look for any accompanying symptoms. Lightning crotch will come and go fairly quickly with minimal fanfare. If you experience pain that is accompanied by vomiting, fever, chills, bleeding, or significant change in vaginal discharge, you should make arrangements to be seen by your care provider, according to the APA. Similarly, if the pain is continual after resting or is so intense that you struggle to speak or walk, something other than lightning crotch is probably at work.

But if you're nearing the end of your pregnancy and are simply being caught off guard by sudden flashes of vaginal pain, don't lose any sleep over it. Lightning crotch is just another glamorous side effect of pregnancy life, one that you can expect to dissipate after you're holding that sweet babe in your arms.