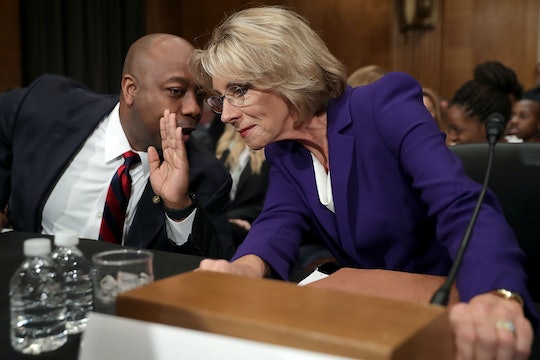 On Tuesday morning, the Senate Health, Education, Labor and Pensions Committee will vote whether or not to confirm billionaire Betsy DeVos as U.S. Secretary of Education. Education advocates and lawmakers have denounced President Donald Trump's controversial pick since he announced her nomination in November. Critics cite her lack of experience and corporate conflicts of interest as reasons she's unqualified to lead. But they also point out her poor track record on public education. That has left many to wonder what changes does Betsy DeVos want to make to public schools? If her work in her home state is any indication, the results could be devastating.

DeVos evaded the toughest questions about her plans for public education during her confirmation hearing last week, Politico reported. What is known, though, is that DeVos is a fierce advocate for the much-derided school choice program, which allows families to choose alternatives to public K-12 schools. If she is confirmed as education secretary, experts believe DeVos will work quickly to expand school choice options through the use of tuition vouchers, charter schools, and scholarships, according to Washington Post. Education advocates also expect that funding for public schools and special education will remain stagnant or decrease under DeVos' leadership, according to the Atlantic. Both actions combined could spell disaster for a school education system already hamstrung by corporate interests.

As chair of the pro-school choice advocacy group American Federation for Children, DeVos spearheaded a lot of changes to the Michigan school system. The biggest change was its expansion of school choice, which led to the nation's largest city charter school network, according to the Detroit Free Press. Although parents had a wide array of K through 12 institutions to choose from, a year-long investigation by the Detroit Free Press found that those schools were poor in quality. That's despite the fact that Michigan used $1 billion in taxpayer money a year on maintaining and regulating charter schools. Despite spending billions, the state failed to hold those institutions accountable as school founders and administrators continued to enjoy kickbacks, the Detroit Free Press found. But this is not just an issue in Michigan — other states have experienced deeper dips in the quality of their education system after expanding school choice.

Research has also shown that widespread school choice programs have lead to failing reading and math scores, discrimination, and exclusion of children with disabilities from the education system. Funneling money meant to support public schools into vouchers and charter schools will only mean students across the country lose out.