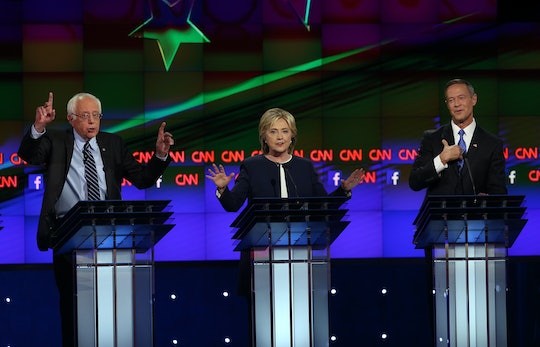 What Channel Is The Dec. 19 Democratic Debate On?

You may not have been hearing about the Democratic candidates as much these days, what with the GOP battle and Donald Trump's controversial comments and all, but still, you'll want to know where to tune in for ABC's Democratic debate. If you've been following the election, you'll know we are awaiting the third installment in the series of six debates sanctioned by the National Democratic Committee, the most recent of which took place in Iowa on Nov. 14. And the next Democratic Debate will air Saturday, Dec. 19 at 8pm ET, 7pm CT, and 5pm PT and will also be live streamed on ABC's site.

As USA Today Reports, Clinton is currently leading the way among the Democratic candidates. There's a difference of 20 points between her and her closest competitor, Bernie Sanders, in national polls, meaning both Sanders and O'Malley may want to start thinking about how they'll sway their supporters if they don't become the Democratic presidential candidate. However, during the last debate, Sanders and O'Malley criticized Clinton's foreign policy record, particularly her authorization to invade Iraq in 2003, and her involvement in the decision to intervene in Libya.

Although Sanders is also popular, some people don't think he can win the election. In a recent Quinnipiac University poll among possible Iowa Democratic Caucus voters, 89 percent of Democrats thought Clinton could win the election. Only 57 percent believed Sanders had a chance at winning the general election. Sanders is also at another disadvantage: The Democratic National Committee has currently restricted him from accessing an important voter database, following controversy that a now-fired Sanders aide allegedly took advantage of a software error to gain access to confidential voter information from Hillary Clinton's team. As CNN reports, Sanders is now threatening to take the DNC to court unless the restrictions are lifted.

O'Malley, meanwhile, doesn't seem to have much name recognition, according to ABC News. In a Monmouth University poll of Iowa voters released on Dec. 8, 41 percent of voters said they don't really have an opinion on Martin O'Malley's favorability.

Will the debate strengthen Clinton's lead in the election? How will they tackle the topic of national security, following the San Bernardino massacre? We'll find out Saturday night!

More Like This
Mom's TikTok Sparks Debate On Whether It's "Normal" For Babysitters To Sleep On The Job
Sea Monsters, Pandas & Everything Else Coming To Netflix In July 2022 For Families
15 Fun & Historical 4th Of July Facts To Share With Your Kids
Elmo Talks About Getting His Covid Vaccine In A Cute New Video