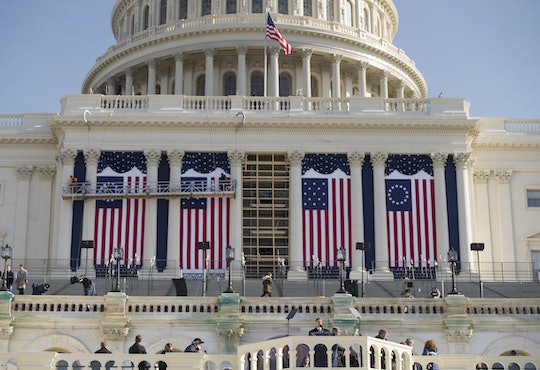 The Inauguration Broadcast Will Be Hard To Miss

Inauguration Day is almost here. The full day and night event on Friday Jan. 21 will mark Americans' final goodbye to President Barack Obama and the first official welcome of President-elect Trump as he takes his oath of office. All told, it's an event you won't want to miss out on, and you'll probably want to know what channel the inauguration will be broadcast on. Luckily, the inauguration will air on practically all cable news stations as well as online — so people have plenty of ways to watch Trump's big day.

The inauguration broadcast will be worth tuning in for at any point on Friday morning — even if you can only watch for a little bit. The day will be a long and eventful one for Trump, and the majority of it will all be captured on camera. The inauguration events begin on Friday at 9:30 a.m. Eastern Time and Trump will swear in at noon, according to Newsweek.

But those who don't have cable or television access — or can't tune in on their TVs during the day — don't need to worry. This year, the inauguration will be broadcast on multiple websites and social media platforms so everyone has an opportunity to catch the broadcast. Twitter will be broadcasting the inauguration live from its website, in a partnership with PBS Newshour, according to Digital Trends. This broadcast will begin at 11 a.m. Eastern Time and end at 5 p.m. Eastern Time.

But the live internet broadcasts won't stop there. Social media sites — such as YouTube — will be broadcasting the inauguration. News websites such as Politico and The Washington Post will also have live streams available for viewing on their websites.