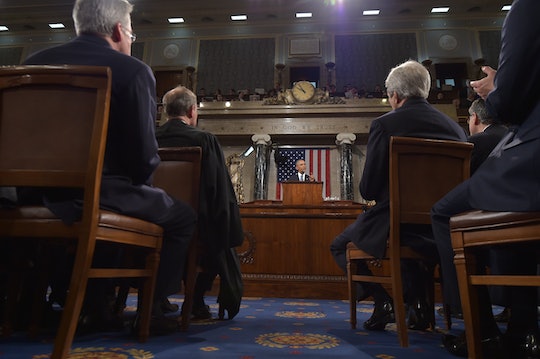 What Channel Is The State Of The Union On? There Are Plenty Of Places You Can Watch The President Speak

It seems like just yesterday that President Obama was being sworn into office, but in reality, his final State of the Union address is just days away. And though we’ll see talking heads weighing in on what will likely be a charged speech, many are still left wondering simply where, when, and how to tune in. Between the thousands of presidential debates and infinite networks, it can be burdensome trying to figure out what channel the State of the Union is on... on top of all that. Don't worry though, because all the answers you need are right here.

For starters, the State of the Union will air at 9 p.m. ET on Tuesday, Jan. 20, according to The Huffington Post (you can RSVP via the White House Facebook page too if you want updates and the ability to chat with fellow like-minded citizens). Just about every major channel will broadcast the speech in addition to CNN, MSNBC, and Fox News — who are sure to have plenty of pre and post-SOTU commentary — there will be non-television options open as well. For example, if you’re depending on your laptop to get your SOTU on, you won't be left in the dark: The Huffington Post will also be streaming the address, in addition to Amazon Video, who will air the SOTU on demand.

These websites and networks aren't the only ones making the SOTU readily available online — the White House will be as well. The Obama administration's Digital Chief Creator, Jason Goldman announced on Medium this week that the address would be available live on wh.gov/sotu as well as the official White House YouTube channel. “... For those who’ve cut the cord from cable and network TV, [and] whether you use a smart TV, web browser, mobile device, or tablet," Goldman wrote, "there’s a way for you to watch the President’s speech as it happens and on-demand.”

The White House will have a heavy presence online this week, and will likely be engaging with the droves of social media users who are sure to have an opinion or two. Like previous addresses, the White House will also be posting video clips, GIFs, and images to social media as they occur, because even they know you’re looking for new reaction pics to use with your friends.

Goldman also hinted at what Obama will be addressing Wednesday night, adding,

Instead of laying out a laundry list of policy proposals for 2016, [the president will] look beyond the next election and ... talk about some of the most important issues that will shape our country for generations to come.

While that leaves plenty up to the imagination, it's something.

Looking for a rebuttal to the president's address? You’re also in luck. Following the SOTU, the Republicans will get an opportunity to sound off as well. This year, South Carolina Gov. Nikki Haley will be bestowed with the task. Though we don’t know what Obama has in store for Wednesday, it’s a safe bet that the Governor will have plenty to disagree with. (Haley's rebuttal will be broadcast on all major networks following Obama’s address.)

Overall, for those who have sworn off cable, there will be more than a few online options available to tune into Tuesday night's State of the Union. But really, no matter what your preferred media platform, it looks like the White House has got you covered. Thanks, Obama.