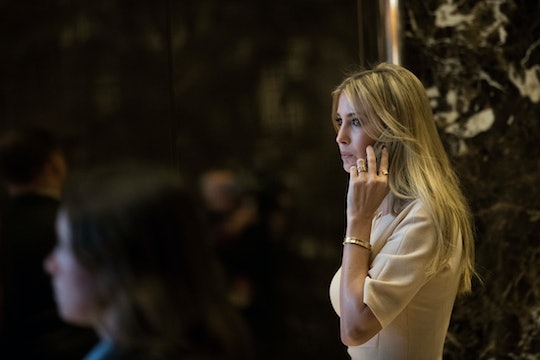 According to CNN, President-elect Donald Trump's daughter Ivanka Trump has reportedly been calling members of Congress to discuss child care legislation, despite the fact that she plays no role in her father's administration. A transition team source told CNN that Ivanka had been phoning members of the tax-writing Ways and Means committee, as well as other Congress members, in order to discuss child care policy. So exactly what child care legislation is Ivanka Trump proposing?

Sources didn't expand on the specifics of Ivanka's calls, but chances are high that Ivanka is pushing for the child care policies her father touted during his campaign. Maternity leave and child care were issues that Ivanka spearheaded during Trump's presidential campaign, and she reportedly helped her father craft his detailed child care plan. At a September rally in Pennsylvania, Ivanka praised Trump's plan, telling voters, "Little focus has been put on how best to alleviate enormous financial burdens childcare places on low-income and middle-income families." Later, she also told reporters, "I'm very passionate about this."

Luckily, revisiting Trump's child care policies from his campaign should give us a good idea as to what legislation Ivanka is pushing for currently.

The child care plan Trump unveiled in September would allow parents to deduct child care expenses (for up to four children) from their income taxes. In an op-ed Ivanka wrote for The Wall Street Journal the day Trump's child care policy was announced, she explained:

This will be capped at the average cost of child care in each family’s state, and the wealthiest individuals will not be eligible for the deduction. The benefit is structured to ensure that working- and middle-class families see the largest reductions in their taxable incomes.

Those who don't qualify for deductions (i.e., families who don't make enough money to need to deduct from income taxes), would be eligible for up to $1,200 in Earned Income Tax Credit spending rebates, instead. Trump's plan would also guarantee six weeks of paid maternity leave (no leave is offered for fathers), and families would be able to make tax-deductible contributions to dependent-care savings accounts. Finally, Trump promised regulatory reform that would promote "community-based" childcare (such as one mom watching several children for others, rather than all moms paying for daycare) and said he would offer incentives for employers that offer daycare.

"My father is prepared to chart a new course that promotes strong families and celebrates their individual needs; one that honors, respects and empowers both working and stay-at-home mothers and caregivers," Ivanka wrote for The Wall Street Journal.

However, not everyone agrees with the benefits of Trump's child care policies. It's been criticized for excluding both fathers and same-sex parents, being difficult to fund, and for not doing enough for the low-income families that need it most. Judging by Ivanka's recent Congress calls, however, it seems like the Trump administration is moving full steam ahead with those proposed policies.