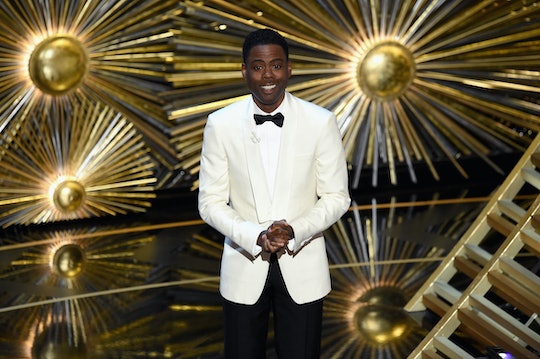 What Chris Rock’s Oscars Performance Meant To Me, A Black Woman

For the last few months leading up to the 2016 Oscars, there have been so many conversations and op-ed pieces about the whiteness surrounding the 88th annual Academy Awards. Everyone, no matter their opinion, weighed in with thoughts and facts and tidbits on what they thought should happen on the show, especially with regard to the black communities and people of color the Oscars so blatantly overlooked: There were interviews with black actors announcing they'd be boycotting the show; Some defended the lack of black, nominated performers; and others insisted on attending as a way of changing the current landscape. With Chris Rock leading the night as host, everyone was pretty anxious to see how he would it'd go. But Chris Rock's Oscars performance made me proud tonight, because he was willing to celebrate a topic the Academy didn't: diversity.

To see a black host on stage on what was arguably the whitest award show in town — well, that sends a message.

From the moment he walked out on stage — to the tune of "Fight the Power," no less — Rock came out swinging. His 11-minute monologue focused on the struggle of black actors and actresses in Hollywood. He didn't shy away from hitting the hard notes, namely how racist the Academy has been and the lack of diversity plaguing the film industry. He poked fun at issues but those same jokes carried weight and importance. 2016 marked the second consecutive year where black actors didn't receive any nominations in the Best Actor or Best Actress categories. The excuse that there were "no films with had people of color in them" isn't one that works — not today, not ever. There were plenty of films not only with actors of color in prominent roles, but there were also ample films helmed by directors of color. None got any nods or recognition. Rock was asked to boycott, which he mentioned in his introductory monologue, but I'm happy he didn't.

His jokes sliced right at the heart of the Academy's most "uncomfortable" issue, and he dropped joke after joke that made the room uncomfortable in its privilege. Rock celebrated the diverse community the Oscars overlooked, and he celebrated it in a room filled with white people.

Instead of simply just being a host, and making sure everyone else felt comfortable and at ease, he made sure that not only did he entertain, but he did so while never once forgetting about the fact that he was a black man in Hollywood, and there are so many others like him. His job might've been to carry the show, but Rock did something much more powerful than take viewers from point A to point B: he committed to making the show about its most uncomfortable topic.

If Chris Rock had boycotted the show, or quit when he had the chance to, what would we have learned? Nothing. We'd be in the same position next year, with actors, actresses, and film industry creatives of color falling just shy of nominations. Representation matters. Visibilty matters. And to see a black host on stage on what was arguably the whitest award show in town, well, that sends a message. The more we see people of color in these positions, the more we force the narrative to change. If we want change, we can't wait for it. We have to enforce it. At Sunday night's Oscars, Rock did exactly that. His jokes sliced right at the heart of the Academy's most "uncomfortable" issue, and he dropped joke after joke that made the room uncomfortable in its privilege. Rock celebrated the diverse community the Oscars overlooked, and he celebrated it in a room filled with white people.

People of color want to be seen and heard and valued and honored. We want what's been awarded to our white counterparts again and again without question.

I think too often the conversation about the lack of race leads people to believe that black people and other marginalized groups of people of color want to do away with anything white. That's not what diversity means at all. All we want is to be seen as equal, to have the same opportunities as anyone else. Chris Rock included that in his opening speech: "We want opportunity.” People of color want to be seen and heard and valued and honored. We want what's been awarded to our white counterparts again and again without question.

It wasn't just the opening that focused on diversity in Hollywood, it was throughout the whole award show. Rock built in skits that celebrated people of color, and though they were wrapped in humor and comedy, the message was still clear: Diversity is better for all of us, and it's a true representation of the artists within these communities.

I honestly was taken aback by how well Chris Rock did tonight. I don't know what I was expecting him to do as host, but I wasn't expecting him to stand up there and continually talk about Hollywood's problem with race. Even though it wasn't was I was expecting, the way he went about doing so was better than I ever could have imagined. He didn't back down, he didn't try to make any of the people in that room feel comfortable. Instead, he spoke truth. Yes, there were many jokes to accompany the truth, but it was still present and heard. Plus, the way he ended the whole night wrapped it all up nicely: "Black lives matter." Because they do. Not for one moment did he forget that, and he didn't give anyone else in that room the chance to either.