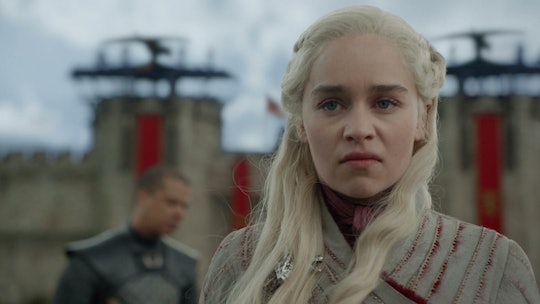 Daenerys' Eye Color May Reveal Her Fate On 'Game Of Thrones'

During the Battle of Winterfell, Melisandre reminded Arya that her murder spree hadn't ended yet; though she'd already killed many, there were still brown eyes, blue eyes, and green eyes that she would close forever. The blue turned out to be the Night King, but what if he wasn't the only major kill on Arya's schedule? Daenerys took a turn for villainy in "The Bells" and now someone may have to stop her. Knowing what color Daenerys' eyes are on Game of Thrones could indicate whether or not she fits Melisandre's prophecy, too. If her eye color matches up, then it could be a sign that Arya will be the one to kill her.

In the A Song of Ice and Fire series by George R. R. Martin, Dany has purple eyes, which is common among Targaryens. But the show hasn't made any effort to conceal star Emilia Clarke's real eye color, which appears to be blue, green, or hazel, depending on the photo. The show previously referred to her as blue-eyed in Season 6. Regardless, she definitely fits into Melisandre's list of colors — though, to be fair, Mel really covered her bases with all those options. And just because Daenerys' eye color may match Arya's kill list doesn't mean Arya is going to be the one to end her (if someone does). Still, the theory has become popular in the wake of Episode 5.

Reddit user SkriL3x shared the idea, though there was some debate about the exact color of Daenerys' eyes in the comment section of their post. It's certainly plausible that Arya could close Dany's eyes forever because she is a master assassin skilled in all forms of murder. Technically, Arya could kill anyone if she put her mind to it. But it's unlikely that all the huge moments in the final season will belong to Arya. Destroying the Night King was her big moment of triumph, so if Dany is killed, it may fall to another character to carry it out.

There's no guarantee that Dany will die at all. Though it seems increasingly probable that her furious spree will cost her her life, it's still only one possible outcome. Perhaps she'll end up ruling Westeros as the tyrant she always swore she'd never be. It would be a bleak end to the show, but it can't be ruled out until the finale airs. And if Dany does die, then there are several suspects besides Arya in the mix. Tyrion and Jon's doubts in Dany have been growing over the last couple of episodes and they both seemed disturbed by the siege of King's Landing. That could lead them to plot against her, together or separately. Either one of them could kill her if they feel she's gone too far.

Melisandre's words to Arya in "The Long Night" may have simply been intended to foreshadow her actions at the end of the episode. It's likely they weren't supposed to have relevance to the story beyond that moment. But if they were, then Arya's list of eye colors is certainly wide enough to include Dany's too — whichever color Clarke's eyes actually are.