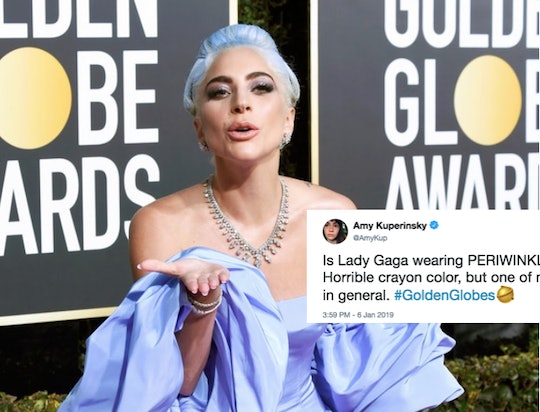 There's no debate about Lady Gaga's performance in A Star Is Born. She is absolutely incredible in the role and deserves a Golden Globe for her performance. But there is a debate surrounding the color of the dress she wore to the Golden Globes on Sunday night. In fact, so many people were wondering: What color is Lady Gaga's Golden Globes dress? People were torn between purple or blue, and it caused some serious debate.

Gaga was nominated for two awards at the 2018 Golden Globes. She was nominated in the categories for Best Performance By An Actress In A Motion Picture — Drama and for Best Original Song — Motion Picture and thought likely to take home two statuettes. Because this was a huge night for her, it was understandable why Gaga would want to show up in a gorgeous gown, and she looked stunning in her Valentino Haute Couture dress and dazzling Tiffany jewels. Of course, in true Gaga fashion, she accessorized her outfit by matching her hair color, too.

Really, people were having a hard time agreeing on one color over another. Some people were totally team blue.

And the dress very well could be blue. Judging by the color of Lady Gaga's hair, which comes off as more blue, it could be a reflection of her dress.

But On The Other Hand... Maybe It's Lilac?

Some people on Twitter were calling the dress lavender, which was a pretty fair assessment.

Or It Could Be Both?

If you're not a fan of picking a side, calling it "blue lavender" is a perfect way to describe the gown. Representatives at Valentino did not immediately return Romper's request for comment about the color of the dress and were therefore unable to settle this debate.

Whatever the case may be about Gaga's dress, one thing is clear — she looked dressed to win some awards. The Globes are meant to honor the biggest movies and TV shows of the year, and A Star Is Born was one of the biggest movies of 2018. Gaga put her whole heart and soul into her performance as Ally, the undiscovered singer suddenly thrust into the spotlight by Bradley Cooper's character, Jackson Maine. People fell in love with the story and the character, including Gaga. She told Variety in November that she would never forget Ally. "I feel Ally inside of me. I wonder how long she'll stay. Or if she'll be there forever," she told Variety.

If there's one thing to know about Lady Gaga, it's that she's memorable. Whether it's her performance in A Star Is Born, or her debatable dress on the red carpet, she'll forever be a part of pop culture's history, even if Twitter can't decide what color her Golden Globes gown actually was.