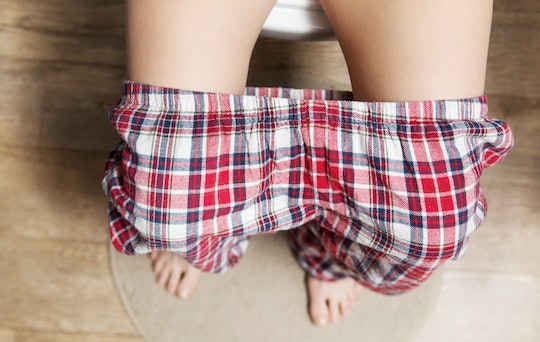 What Color Should Your Vaginal Discharge Be During Pregnancy?

Let's face it, about 90 percent of pregnancy is just a whole lot of TMI wrapped in a big-bellied package (OK, more like 100 percent), not least of which is vaginal discharge. I know, I know, but it has to be talked about because it can signal real problems. There's no doubt you've noticed the increase down below, so what color should your vaginal discharge be during pregnancy?

Chances are, you have more vaginal discharge than you're used to, and it looks and feels differently than before. There's a word for that — leukorrhea. Leukorrhea (impossible to spell, harder to pronounce) is the abundant milky white or clear, mild-smelling vaginal discharge of pregnancy, according to Britain's National Health Services (NHS).

The discharge can begin as early as a week or two after conception, and just gets worse until the end of the pregnancy, when it will thicken up and even have streaks of blood running through it. This blood, I kid you not, is called "the bloody show," and is a sign things are about to get super real in your lady garden. If you notice that it feels a bit like you're peeing yourself, according to Obstetrics and Gynecology Sixth Edition, it's likely that you're actually leaking amniotic fluid, and should definitely get that looked at, because if you're not close to your due date, that can be dangerous. If you are, again, things are about to get wild in your woman zone.

However, if your discharge is any color other than milky white, clear, or just slightly yellowish, if it smells strongly, if the texture has changed, or if you notice that there is even more of it than usual, you need to call your OB-GYN, according to the NHS. While infections like yeast and bacterial vaginosis are common during pregnancy, they need to be treated so that the infection does not spread to your uterus.

Pregnancy discharge can be a huge pain in the butt, but please don't use tampons, as they can introduce bacteria into the vagina and cervical areas where you don't want excess bacteria. Also, because you're partially immunocompromised, you're at a greater risk for toxic shock syndrome, noted Infectious Diseases in Obstetrics and Gynecology, and that's a scary proposition at any time. Pantyliners and menstrual panties are your friends, trust me. Well, until that bloody show, because you know what comes after that.