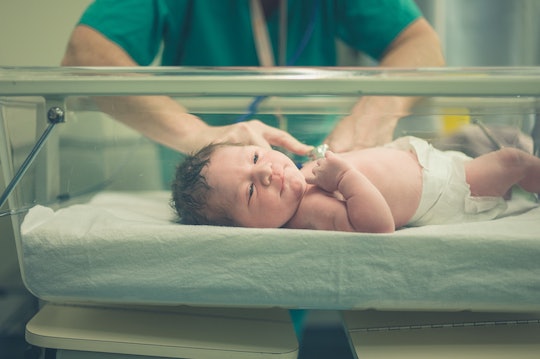 Newborn Screening Tests Differ From State To State, But Are Essential Everywhere

When parents meet their brand new babies for the very first time, there's a quick accounting of all the essential parts that goes down: 10 fingers, 10 toes, a cowlick like Dad and green eyes the exact same shade as Mom's. But even if everything looks like it's in (adorable) working order, doctors still need to make sure that little ones have a truly clean bill of health with a routine screening. In general, there's a laundry list of diseases that all hospitals screen for, but knowing what conditions newborns are screened for in each state can help parents to ensure that their baby is getting all the tests he or she needs.

But before we even get into that, it's crucial to note that it's almost impossible to overstate the importance of newborn screening. According to the Centers for Disease Control (CDC), newborn screening generally includes a blood test, a hearing test, and a screening for critical congenital heart defects, and takes place before the baby even heads home from the hospital after birth.

And neglecting to get a baby tested, the CDC states, means missing out on the opportunity to catch and treat a whole spate of conditions early — and that lack of attention to these conditions can lead to awful outcomes, such as brain and organ damage and even death.

But what exactly are these nefarious-sounding conditions? According to the U.S. National Library of Medicine, the Health Resources and Services Administration's (HRSA) Recommended Uniform Screening Panel specifies 32 conditions for newborn screening, and most states test for each one of them. These include a slew of conditions whose effects can be mitigated dramatically if they're identified and treated early. So, it's worth saying again: Newborn screening could not be more essential to any baby's well-being.

Take, for example, Phenylketonuria, more commonly known as PKU. It's a metabolic disorder that prevents a person from being able to properly process phenylalanine, an amino acid found in protein, according to the National Institutes of Health. If babies with PKU consume high-protein foods that contain the amino acid, it will gradually build up in their bodies and brains and land them with symptoms of intellectual and developmental disabilities as early as when they're 3 months old in some cases. But if a baby's PKU is detected within the first several days after birth, the special diet on which they will be placed immediately will enable them to live relatively normal lives, the NIH notes.

For a breakdown of which conditions states cover exactly, visit the extremely handy and easy to use database at babysfirsttest.org. That way, you'll know in advance if your state does not include a condition for which you want your baby tested and can make arrangements to get an expanded (supplemental) screening, which the U.S. National Library of Science reports is possible.

Because there is some variation from state to state. California, for example, mandates that all newborns be screened for amino acid disorders, endocrine disorders, fatty acid oxidation disorders, hemoglobin disorders, organic acid conditions, and others, according to the database. New York, for instance, requires for testing in all of those categories, as well as the lysosomal storage disorders Krabbe and Pompe.

For a lot of the conditions included in the blood test portion of most newborn screenings — most of which are inherited, by the way — a baby may not exhibit any physical signs of a problem right away, according to March of Dimes. So, medical providers tend to get the results of the most serious of the conditions in just five days, with the rest following a couple of days later.

That way, babies who require additional treatment get it ASAP — and that's a relief for everybody.