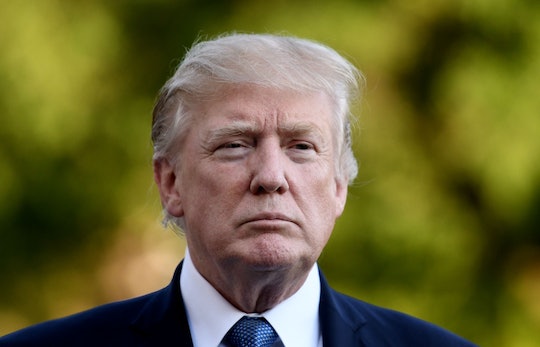 Here Are All The Countries Included In Trump's New Travel Ban

Since shortly after taking office in January, President Donald Trump has been attempting to implement an executive order on immigration that he insists is meant to make the country safer. But his attempts have been met by widespread protests by Americans who have argued that he is really just trying to institute a ban on Muslims that is discriminatory and unfair. Trump ultimately revised his order — even though he argued that he actually thought it needed to be even tougher — and now, his latest version suggests he may be changing up his strategy. What countries are included in Trump's new travel ban? Chad, North Korea, and Venezuela have been added to the list, according to The Guardian, but critics say this is simply the president's latest attempt to clear the legal hurdles that have opposed it in the past.

Trump released a new Presidential Proclamation Sunday, outlining a list of eight countries whose nationals would be subject to "suspended and limited" entry into the United States. Most of the countries affected by Trump's previous ban — Syria, Iran, Yemen, Libya, and Somalia — were still included. But the Sudan has been removed the newest version, reportedly because the Trump administration's latest review found that it met necessary security standards, according to TIME.

Some of the countries with remaining inadequacies face significant challenges. Others have made strides to improve their protocols and procedures, and I commend them for these efforts. But until they satisfactorily address the identified inadequacies, I have determined, on the basis of recommendations from the Secretary of Homeland Security and other members of my Cabinet, to impose certain conditional restrictions and limitations ... on entry into the United States.

That might all sound well and good, but not everyone is buying Trump's explanation. For one, Trump's previous travel ban actually expired on Sunday according to The Washington Post, meaning that he would have had to introduce a new one anyway. And given the legal challenges the ban has previously faced for appearing to specifically target Muslim-majority nations, many are arguing that the inclusion of Chad, North Korea, and Venezuela are little more than deflection techniques. After all, though Trump has taken aim at North Korea by adding the country to the ban, the net migration rate between the two countries is actually zero, according to The Guardian. And, according to TIME, the restrictions on Venezuela only actually affect certain government officials and their families from five Venezuelan security agencies.

In other words, critics of the travel ban are arguing that Trump's latest order is still, at its core, an attempt to double down on his December 2015 campaign promise to institute "a total and complete shutdown of Muslims entering the United States," according to CNN. And they aren't even sort of here for it: as Muslim Advocates Legal Director Johnathan Smith told The Guardian,

Let us not be fooled by the administration’s attempted tricks and semantics, this is still the same Muslim ban. The administration is once again making cosmetic adjustments to the Muslim ban in hopes that it will pass the barest possible definition of anything else; but they’ve failed again.

Six of President Trump’s targeted countries are Muslim. The fact that Trump has added North Korea — with few visitors to the U.S. — and a few government officials from Venezuela doesn’t obfuscate the real fact that the administration’s order is still a Muslim ban.

Ultimately, Romero said that Trump's newest ban was simply "an apparent effort to paper over the original sin of the Muslim ban, especially when just last week Trump said he wanted a ‘larger, tougher, more specific’ ban,” and emphasized that “President Trump’s original sin of targeting Muslims cannot be cured by throwing other countries onto his enemies list.”

In all likelihood, Trump's current version of the ban will be yet another element of an ongoing process to restrict and limit immigration, and even in its current form, there will still be a number of legal hoops to jump through. According to The New York Times, on Oct. 10, the Supreme Court will hear arguments to debate the legality of the order, and it's possible that the revisions could affect the outcome of that ruling. But one thing that seems clear is that the issue of the so-called Muslim ban is far from being over, and that Trump isn't showing any signs of backing down.