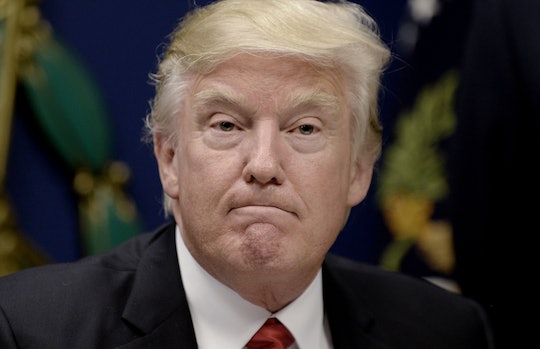 There are a lot of concerns surrounding President Donald Trump’s controversial executive order to ban all people from a select few terrorism-prone nations from entering the United States. This dramatic move will likely have a serious implications all over the world, but probably one of the more troubling factors is that the Middle Eastern countries included in Trump’s travel ban have something in common — and it’s not only because the majority of their citizens are Muslim. According to The Washington Post, the seven countries included in Trump’s immigration order are places that “he does not appear to have any business interests.” Romper reached out to the White House for comment and is awaiting a response.

Although the text of the order doesn't name the countries, CNN reported that citizens from Iran, Iraq, Syria, Sudan, Libya, Yemen and Somalia will be affected by the three-month immigration ban. But, as Bloomberg pointed out, this list excludes several Muslim-majority countries where the Trump Organization is active, has previously done business in, or has pursued potential business opportunities. This includes golf courses in the United Arab Emirates and two luxury towers operating in Turkey, which has been hit with several horrific terrorist attacks in recent months. The State Department also updated a travel warning for Americans traveling to the country due to "increased threats from terrorist groups."

Stephanie Grisham, a White House spokeswoman, told The Washington Post the countries included in the list are "high-risk territories" "based on Congressional statute and nothing else."

The order is problematic for a slew of reasons, but because Trump has not divested from his vast business empire many citizens and ethics experts are concerned that this list of seven countries may have been constructed with his company’s interests in mind.

A day before Trump signed the order on Friday, Norm Eisen, the chairman of liberal watchdog group Citizens for Responsibility and Ethics in Washington and a former ethics adviser to Barack Obama, tweeted that Trump’s ban was a “constitutional violation.”

"WARNING: Mr. Pres. your Muslim ban excludes countries where you have business interests," Eisen tweeted on Thursday. "That is a CONSTITUTIONAL VIOLATION. See u in court."

The travel ban in and of itself is troubling and only time will tell just how serious the ripple effect of it might be for Americans, refugees, and citizens all over the world. There is a lot to be concerned about, but excluding certain countries that Trump has done business with, but have also faced troublesome issues with terrorism is a big problem.