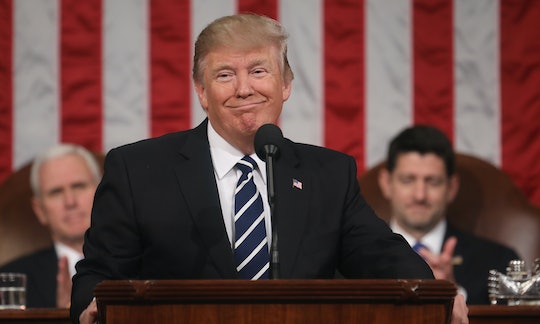 The Changes Made In Trump's New Travel Ban

Just a few short weeks into his presidency, President Donald Trump signed an executive order — a travel ban on seven different Muslim-majority countries — that would later instill confusion and fear in travelers looking to get into the United States. Since the order was blocked by a federal judge, Trump's administration has been working on re-writing a new travel ban that, it hopes, will be better accepted in legal corners. But what countries will be on Trump's new travel ban, and will it affect immigrants and refugees in a similar way as the initial order?

The original travel ban stated that citizens of seven different countries — Iran, Iraq, Syria, Sudan, Libya, Yemen, and Somalia — could not enter the United States for 90 days and barred all refugees from entering the country for 120 days after the order was signed, according to CNN. Since Trump's original travel ban was suspended in February, the Trump administration promised a newly revised travel ban that would "clarify its intentions" and "address concerns raised by the appeals court judges," according to Reuters.

In the past few weeks, the Trump administration has been promising a newly revised travel ban, pushing back the release date over time — and on Tuesday, according to The Washington Post, the signing of the order was pushed back yet again, for a third time, to allow the spotlight to focus on the president's recent joint address to Congress. As Trump gets closer to signing the new order, however, more details are being released about its revisions — including what countries may be included in the new travel ban.

According to The Post, Trump's new travel ban won't change drastically from the original travel ban — which includes much of the same countries in the original executive order. However, one country — Iraq — will be left out of the seven, according to unnamed advisers who spoke to the outlet, this despite earlier reports that stated that all of the seven countries would be included in the revised ban. According to Reuters, Iraq's exclusion from the new ban could be because of "its key role in fighting the Islamic State Group." This exclusion of Iraq also comes after a memo from the Department of Homeland Security, which found that the seven countries under Trump's travel ban "do not pose a significant threat to terrorism."

In addition to the exclusion of Iraq, the new travel ban will also have a few more revisions, according to Politico. The new travel ban is expected to temporarily halt all refugee admissions and will not affect those who are green card holders or have United States visas. Unlike the old order, The Post reported, the new order will not go into effect immediately after being signed.

According to Politico, it is still possible for changes to be made to the draft before Trump signs it. However, Trump's current revision of the ban will allow for Iraq citizens to freely travel to the United States — for now.