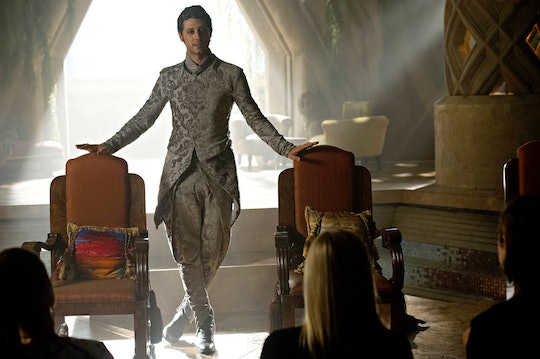 The Fillory Castle Is In Danger On 'The Magicians'

If there's one thing I've come to know about The Magicians, it's that nothing is ever said for no reason. So when the Beast made mention to Julia that he'd placed a curse on the Fillory castle, you better believe that's going to come back to haunt the group at some point. So what curse did the Beast put on the castle in The Magicians? He seemed pretty intent on keeping that piece of information a secret, but whatever this curse does, it probably isn't going to be good.

Granted, I've never experienced the wrath of a curse before, so I can't say anything of this from experience. But on the whole, I'd say curses in general don't tend to be a lot of fun. What we do know is that the Beast placed this curse on the castle as a retaliation for not being able to wear the crown himself. So whatever he did makes it so that the children of earth don't get to sit on the throne for very long before suffering the consequences. Think of it as a "if I can't have the crown, then no one can have it" type of a thing. However, it has yet to be revealed what exactly the curse is and how it gets activated.

The good news about this is that Quentin is at least aware that a curse exist, even if he can't pinpoint any details about it. After warning Julia that they were going after the Beast despite the fact that she's not done with him yet, she reciprocated the favor by sharing with her BFF what the Beast had said to her about there being a curse on the castle. So at least he knows the look out for it if something weird starts happening in Fillory.

At the end of the hour, Quentin and the rest of the gang had returned to the castle, where Eliot has been hard at work using his farm boy knowledge to help get his people out of starvation (by way of fertilizer). So it's probably only a matter of time until this curse thing takes center stage. I can only hope that the gang will be able to figure their way out of whatever nightmarish situation happens next like they've done many times before. But since the curse was created by the Beast himself, I doubt it'll be easy.