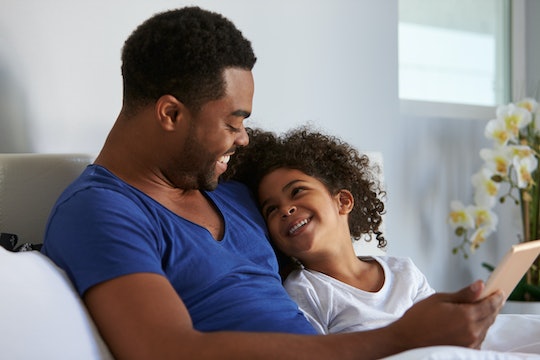 Don't Panic, Dad: You Can Literally Do *Anything* To Bond With Your Daughter

Having a daughter is a pretty spectacular thing. More than ever, little girls or femme presenting kids are being encouraged to live life more fully, unconstrained by the societal norms that so long bound them to archaic ideas of what it means to be feminine. Our daughters are going to be a fierce, intelligent, independent group of people, and we as their parents will be playing a big part in that growth. On the surface, being the mom of a daughter seems intuitive, ingrained in our nature. But fathers may grapple with what dads can do with their daughters that will foster their children to become the best version of themselves.

To put it very simply, men should do everything that they do with their sons with their daughters, and the same thing goes for mothers with sons. They should build things with them, teach them how to change their tires, take them to soccer games, throw them in the pool, and have fun. That's not to say that the daughters will grow to love any of these things, but they should be exposed to it. They should know the things their father likes to do, what he's good at. If you're a plumber, show your daughter how to turn off the water to the sink. If you're an engineer, build K'nex machines that are worthy of science fair.

What dads can do with daughters isn't limited to experiences either. Watching my daughter and husband interact has been one of the joys of my life. My daughter is the princess's princess. She loves all things rainbows and unicorns, she has an undying love of animals, and she knew what eyeshadow was before she turned 3. My husband has been her cheerleader the whole way. He has let her make him up, play with his hair, paint his nails, and had tea parties with his pinky up. He's "rescued" her from her tower and then defeated the pirates out to abscond with her.

And it isn't just about being a father that makes the relationship so crucial. A study published in Child Development Perspectives found that individual parents each need time to cultivate relationships with their children, regardless of the gender identification of either. This parental bond is crucial for the child as they develop their ability to regulate their emotions. Their research suggests that "variations in parenting, both concurrently and earlier in childhood, are associated with the activation of brain networks that support the experience and regulation of emotions during adolescence." That means that what dads do with their daughters not only helps them in life, but may fundamentally change their brain.

Children are most engaged when they're excited about an activity, and often, they're most excited to experience the things that we love to do and get excited about. Dads should take that idea and run with it.