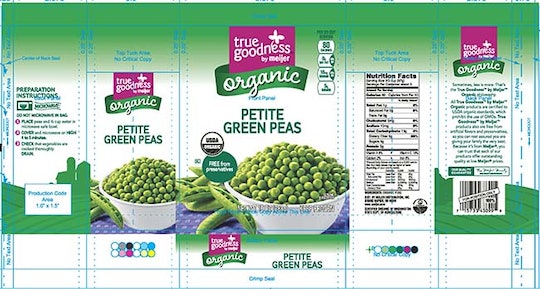 What Dates Of Costco Frozen Vegetables Are Safe To Eat? Check The Labels & 'Use By' Dates

If you bought frozen peas or corn at Costco recently, you're going to want to take a closer look at the packaging. CRF Frozen Foods, which distributes frozen veggies to Costco and other retailers, has issued a recall because routine testing found some batches of its product was contaminated with listeria. The important thing to note is that, to date, no one has reported illness from the contaminated veggies, but take a look at the labels to find out which date of Costco frozen vegetables are safe to eat. It's also worth noting, that according to the recall notice, the frozen organic veggies are also being sold under brands for Schwan's and Meijer.

The Listeria bacteria was found in one batch of peas and one batch of organic white sweet cut corn, which was then mixed into a variety of medleys and sold alone under several brands including True Goodness by Meijer, Wellsley Farms Organic, Organic by Nature, and Schwan's. The potentially contaminated vegetables, according to CRF Frozen Foods, were distributed starting in September of 2015 through just a few weeks ago on March 16. If you've identified you've got one of these bags of frozen veggies, now you need to look at the "Use By Date" on the package.

Schwan's also has a frozen corn product included in the recall, but the FDA didn't provide an image and there doesn't seem to be an expiration date associated with the potentially contaminated corn, only a UPC code of 007218060433, followed by the additional code 2B5320.

If you have any of these products you think are part of the recall, just take them back to the store where you purchased them or contact CRF Frozen Foods.