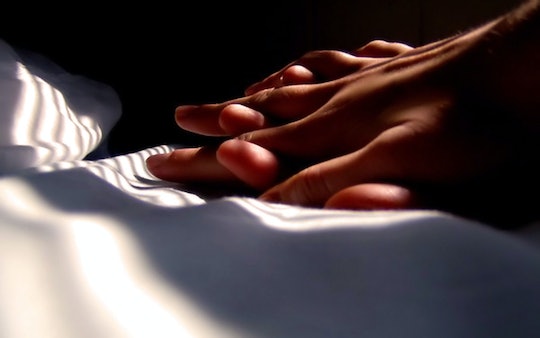 What Dating When You’re A Single Mom Is Like, & Yes, I Did Drive 124 Miles For Sex, Thank You Very Much

Not many people go into a pregnancy thinking, “OK, how is this going to affect my ability to get a date?” but I was single, and although I didn’t have any plans to date while I was busying creating another human, I knew that at some point in the future, I’d be a single mom who'd want romance in my life again. “People with kids date all the time!” I told myself, even though I didn’t have the emotional energy to think about it much more beyond that.

I don’t know if it was hormones, or just how sick I was, but I spent the majority of my pregnancy being totally grossed out by sex. The idea that I had ever had sex with anyone, let alone that I would ever do it again, made me want to take a shower for the rest of my life.

After giving birth, I still wasn’t interested in sex (duh), but I was starting to feel a longing for intimacy. I’d think how nice it would be, sometimes, to have someone to curl up next to in bed. I also would’ve killed to be able to roll over in the middle of the night and say, “Your turn.”

I decided to dust off the old OKCupid profile when my child was 4 months old. When I logged in and checked the “Has a kid” box for the first time, I was immediately overcome with guilt. It seemed as if there was probably a certain length of time I should’ve waited before I started dating again, and 4 months suddenly seemed way too short. Who’d want to date someone with a baby that small? Wouldn’t people think it was weird?

I ended up reasoning with myself that having a kid didn’t negate the other aspects of my personality; I was a mom, but I wasn’t just a mom. As long as I was upfront with people, and as long as my child was my first priority, dating — hell, even having dinner with another adult —shouldn’t be a problem.

Even though I had resolved to let myself start looking for a romantic partner, I couldn’t help but feel anxious about what dating would actually look like now that I had a baby. On the last season of The Amazing Race, there was a couple who’d been together for eight months, but the guy still hadn’t met his girlfriend’s young son. Her reasoning was that she’d brought men into her son’s life before who ended up disappointing him when they didn’t stick around, and she didn’t want to do that to her kid again.

I tried not to think too much about how I was now in a place where I was getting life lessons from The Amazing Race, but I had to admit that I hadn’t thought too much about selecting dating partners based on their potential as parental figures for my child. I guess I’d always seen myself as the one and only parent, and I had never considered the possibility that another might come along.

I also never considered waiting long to introduce my child to a potential partner. As much as I could understand why some parents might choose to do so, I couldn’t picture making that choice myself. Of course, my child’s safety and comfort are the most important things to me, but she’s such a big part of my day-to-day life that, strange as it seems, I had a hard time picturing myself dating without her.

I live in a tiny town in the middle of nowhere with a population of around 8,000, and that population skews significantly older and less liberal than me. If I wanted to meet anyone who I might actually hit it off with, I’d have to go online. Unfortunately, all of my matches were from “nearby” cities (in this case, 150 to 300 miles away).

Weeks went by and the idiotic messages slowly trickled in. I finally heard from someone I was actually interested in. Let's call him Adam, and even though I wasn’t sure I really wanted to date another cisgender man, he was super nice and very cute (and was playing a guitar in his profile picture, because despite all of the lessons I should’ve been learning over the years, I still date musicians exactly 100 percent of the time). He was from another small town about 120 miles away, which was pretty good considering most of the others were no less than a five-hour drive —not exactly convenient when you have an infant.

Adam and I seemed to really hit it off (as much as you can hit it off with someone you’ve only texted/talked to on the phone), and I tried to keep myself from going full-on teenager, although if I’m being honest, I did. It felt so good to connect with someone again in a romantic way, and I was desperate for it to go well.

The first time I went to meet him, I took my kid along. She was still too small to be away from me for long, and I figured that if he was going to date me, he should get an idea of the whole package up front. We met up for coffee and he was very sweet with the baby, but it was awkward. I was wearing her in her carrier, and he kept glancing around furtively, saying stuff like, “Man, if any of my buds from work see me, they’re going to be so confused, haha.” I tried to laugh it off, but all I kept thinking was how stupid I was being. I felt as if motherhood was the choice I had made, and motherhood meant one thing, and that thing wasn’t casual dating.

Sex didn’t come into it during that first visit, of course. In fact, except for some light to moderate sexting, sex didn’t come at all until five months later. The kid was old enough to leave with Grandma for the day, so Adam and I made plans. The whole way there, I kept second-guessing myself: first, because of the guilt I felt for leaving my child so that I could hook up with someone; second, because only a real loser would do what I was doing. I felt weak for not being able to just deal with being single until it was convenient for me to date again.

Plus, I hadn’t had sex since conceiving my child, and I’d noticed some major pelvic changes while doing yoga that involved some raucous queefing in any position where my legs went above my head. And ... the boobs! What do you do with lactating breasts when you’re trying to get busy with someone you barely know? How do you even broach that subject? “Don’t touch those, you might get sprayed!”?

We decided, in advance, to just hang out at his place, so I knew The Sex was coming. He’d said in an earlier text that we could “Netflix and chill,” obviously being ironic about it, but also somehow totally sincere at the same time. He made me an Old Fashioned at 11 in the morning, which I found charming. To be honest, he could have done just about anything and I still would have slept with him. Not because he was the most irresistible person in the world, but because I felt so disconnected from myself as a sexual being that I yearned to feel close to that part of myself again.

So, we did it. It was probably as good as first-time awkward sex can be. I did warn him about the possibility of spontaneous lactation, and he laughed, but I noticed him avoiding my boobs like they might explode on impact for the rest of the occasion. I also found it pretty hard to relax, as I was in a full vagina-fart panic mode pretty much the whole time. I am happy to report there were zero incidents of vaginal flatulence.

We hung out for another couple of hours. He took me to a dam, which was pretty, and felt (as so much of our encounter had) like something I would’ve done with my boyfriend in high school.

As I drove home that evening, my boobs were aching like crazy; it was the longest time I’d ever gone without nursing my child. Again, I felt guilty, though I tried to be kind to myself, to tell myself that it was OK for me to be something other than a mother for one day.

I’m still not sure I believed it, but it felt so good to try.