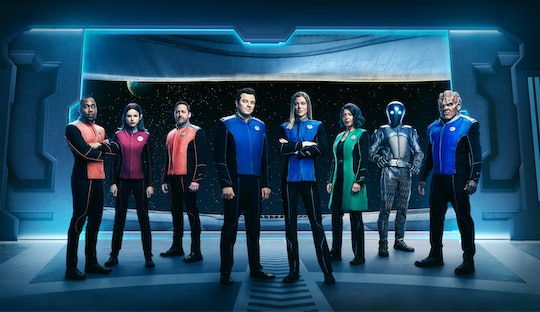 Season 2 Of 'The Orville' Returns To Its Original Time Slot

Seth MacFarlane's space adventure series, The Orville, is back with a second season, and fans couldn't be happier. The new season continues to follow the crew of the USS Orville, as they hilariously combat their personal issues while navigating the dangers of deep space. Season 2 premiered on Dec. 30 after Sunday-night football on Fox, but because the show doesn’t air on Sundays, fans are wondering: what day does The Orville air normally?

New episodes of The Orville will air Thursday nights on Fox — returning to the same time slot as Season 1. For those watching on Fox.com, the Fox Now mobile app, or Hulu, new episodes should be available to stream the next day (Friday morning). However, unlike the 12-episode first season, fans will be thrilled to know that the second season of The Orville will be slightly longer. According to Forbes, Season 2 will feature a total of 14 episodes — each one running seven to eight minutes longer than the previous season’s installments.

The Season 2 premiere reacquainted fans with their favorite space crew, as USS Orville headed to Morcus so that Lieutenant Commander Bortus (Peter Macon) could take part in his annual alien ceremony. Captain Ed Mercer (Seth MacFarlane) still has feelings for his ex-wife, Commander Kelly Grayson (Adrianne Palicki), and now that she’s in a relationship with Cassius (Chris Johnson), things are getting more complicated between them.

Angered that her son Marcus (B.J. Tanner) is under the influence of a bad kid, Dr. Claire Finn (Penny Johnson Jerald) gets into a heated argument with the trouble maker’s parents. While all this drama is going down, Lieutenant Gordon Malloy (Scott Grimes) and Lieutenant Alara Kitan (Halston Sage) are each trying to find romantic connections on the ship, but end up failing miserably.

While the new season jumps back into USS Orville you know and love, it may look and feel slightly different than the first season. In an interview with USA Today, MacFarlane revealed that with a bigger budget and longer episodes, Season 2 will focus more on the characters and the science-fiction aspect of the show. "People can expect to see a visual expansion, an expanded knowledge about the characters and their relationships and a show that’s been worth the wait,” said MacFarlane. “The budget is bigger for Season 2 — I think people will be shocked with the level of feature-quality cinematic work they’re going to see.”

The Orville creator and showrunner told USA Today that he always aimed for his hybrid comedy/drama series to be tonally similar to M*A*S*H, and after getting a foothold on the storylines and characters in the first season, the show was finally able to set that tone.

“You can’t just be an hour-long jokefest, that works for a movie, but not for a television series where you want people to come back week after week and care what happens to these characters," said MacFarlane. “Going into this, I was not sure if viewers would insist everything be joke, joke, joke, joke. And it really wasn’t that. They were responding to the science fiction and the feedback I got was they wanted more of it.”

So, for The Orville fans, it looks like there is good news all around. Not only is the show returning to its original Thursday night time slot, it's coming back with longer episodes, a longer season, and a bigger budget — so you can expect more out-of-this-world fun for Season 2.

New episodes of The Orville air on Thursdays, at 9 p.m. on Fox.