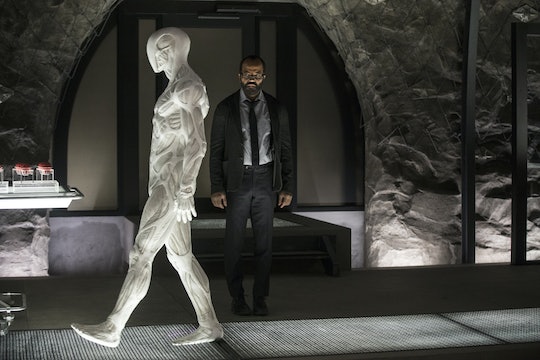 For much of "The Riddle of the Sphinx," Bernard was lost in his memories. He kept having flashbacks to the past that he couldn't totally account for because he couldn't pinpoint when exactly they had happened. He saw himself in a facility not unlike the one he'd visited with Charlotte in Episode 1, except this time the drone hosts operating it killed the human technicians while Bernard stole a key item. But what did Bernard take from Delos on Westworld?

Bernard's journey into the past started when Clementine deposited him in a cave where Elsie was chained up, kept captive there by Bernard himself since Season 1. She was obviously none too pleased, but she agreed to help Bernard with the myriad of maladies that had been affecting him since Season 2 began. The cave itself seemed to unlock some of Bernard's memories and he remembered a facility hidden behind the rocks there, which he led Elsie into so they could begin repairs.

But they both found more than they bargained for within the station. Not only were drone hosts drifting around, but it was still littered with the bodies of the techs, apparently untouched since the robot rebellion had begun. That actually helped place it in time: the techs hadn't decomposed much, so it could only have been a few days at most. That meant that Bernard stole the item (and witnessed the murder of the techs) shortly before Dolores began her uprising.

Figuring out what the item is connects directly to what else was hidden within the facility.

Bernard took a small, red, spherical object that was being constructed by machines in a similar manner to the way hosts are made. The show didn't explicitly say what it was, but context clues lent themselves to speculation. The object looked a lot like the host "brains," which viewers have seen yanked out of their heads several times in the second season. However, the host brains were white and this was red, so if it did contain everything a mind did (including memories, personality traits, thoughts, etc.) then it seemed to be of a different type.

Bernard soon realized that the station wasn't being used to make hosts, though there was similar tech and supplies; there was even the white milky substance that the hosts were made of, which at least one of the technicians was drowned in. After opening another secret door, Bernard revealed what the lab was being used for: it was trying to keep company founder James Delos alive.

James had died 30-off years ago, back when William took over the company from him, but he didn't plan to go anywhere. Instead he and William began to develop a secret project: they would use the park technology to try and implant James' consciousness into a host body. Perfecting that process would mean humans could live forever, but unfortunately it wasn't possible. Scenes throughout the episode hinted at the multiple failed attempts; though James could function for days, sometimes weeks, at a time, he would eventually break down entirely. Blending hosts with humans just couldn't be done.

But that calls into question why Bernard would steal one of the red brains (if indeed that's what they are) at all. Was he protecting James' consciousness in case the park was destroyed? Did Ford have plans to implant James' mind into another host? Does Bernard still have the item after everything he went through, or was it lost somewhere in the park? And why did the drone hosts kill everyone, themselves included? Was the facility programmed to self-destruct at a certain point?

Sometimes Westworld feels like an endless font of questions. Hopefully some of them will be answered later on in Season 2, especially since Bernard's theft can't go unnoticed for long.